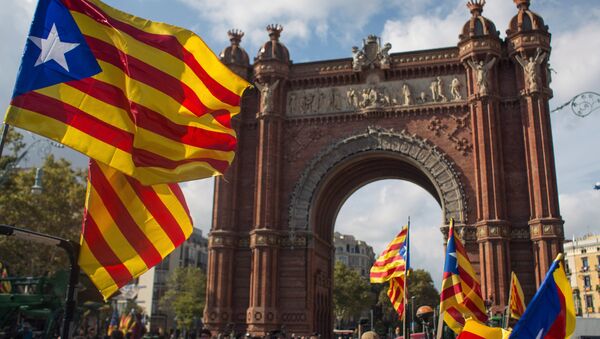 Exit polls from Catalonia’s snap regional election have shown a likely victory for separatist parties, although they've given some ground to pro-union parties since 2015. The election was called in late October after the Spanish government dissolved the Catalan Parliament for participating in an independence referendum deemed to be illegal.

Popular Catalan newspaper La Vanguardia reported that separatist parties would retain 67-71 seats in the 135-seat assembly. The turnout was reported to be 68.3 to 69.4 percent of the voting population. Opinion polls showed an even divide between pro-independence and pro-union parties going into the election.

A plurality of seats will go to a unionist party: the center-left Citizens (Cs) party. Previously, separatist parties held 72 seats in the Catalan Parliament, giving them an absolutely majority. Sixty-eight seats are needed for an absolute majority.

In October, Catalans voted to secede from Spain and declare Catalonia a sovereign state. Madrid replied with decisive force by declaring the regional referendum illegal, dissolving the separatist regional parliament, arresting most of Catalonia's pro-independence leaders and sending President Carles Puigdemont fleeing from the nation, then called for an early election in December.

Puigdemont, who has been living in exile in Belgium, has called for a return to regional order in Catalonia. His former vice president, Oriol Junqueras, also took a conciliatory tone — a far cry from previous calls for unilateral secession. "I can assure you that we are democrats before we are separatists and that the aim [of gaining independence] does not always justify the means," said Junqueras, who is currently being held in custody under charges of sedition.

But many observers doubt that the divide between unionists and separatists can be closed so easily.

The lines in Catalonia are generally drawn between right-wing Catalan nationalist parties such as Puigdemont's Junts pel Sí (JxSi) coalition and left-wing European socialist parties such as the Citizens (Cs) and Socialists' Party of Catalonia that support Spanish unionism. However, smaller parties like the far-left and pro-separatist Popular Unity Candidacy (CUP) and the conservative unionist People's Party (PP) show the issue transcends the traditional left/right divides for many Catalans.

As separatists continue to control the parliament, tensions between Madrid and Barcelona are nearly certain to continue. Over 1,000 people were arrested during clashes between federal police and protesters in the days directly following the referendum.

But a unionist victory would have been no guarantor of stability, either, as 2 million Catalans voted for secession in October and are unlikely to abandon their cause.

Spanish President Mariano Rajoy has enjoyed the support of fellow European governments, most of whom declared that they would not recognize an independent Catalonia. But he's also been relying on the crisis to deflect attention away from a kickbacks-for-contracts corruption scandal that has implicated multiple members of his party.

Catalonia has long been the industrial and business center of Spain, accounting for a fifth of the Spanish economy but only about 16 percent of the population. However, the chaos that followed the referendum has led to over 2,000 companies moving their headquarters from Catalonia to elsewhere in Spain.