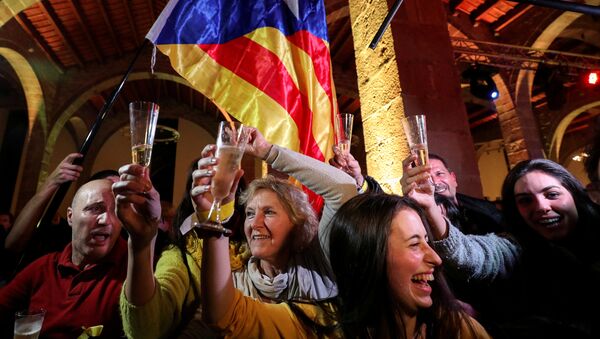 The results are in from Catalonia's snap parliamentary election, and separatist parties have held onto their majority. They dropped from 72 to 70 total seats held, but this still gives them an absolute majority of the regional parliament's 135 seats.

Junts per Catalunya (JuntsxCat, or Together for Catalonia), the party of ousted president Carles Puigdemont, claimed victory in the regional election in a statement issued after the official results came in on Thursday. JuntsxCat is slated to hold 34 seats, making up almost half of the independence coalition. Two other parties, the left-wing Esquerra Republicana de Catalunya (Republican Left of Catalonia) and Candidatura d'Unitat Popular (Popular Unity Candidacy), make up the rest of the independence coalition.

Puigdemont himself, currently living in exile in Belgium, said that the vote was a victory for the "Catalan Republic," the name for the state that he and his fellow secessionists attempted to create earlier this year. He added that "no one can dispute" the secessionists' victory, that the "Spanish state has been defeated," and that the results had dealt Spanish Prime Minister Mariano Rajoy a 'slap in the face.'

However, complicating matters is that the single largest party after the election is Ciutadans ("Citizens"), a center-left group that supports remaining within Spain. They won 37 seats, up from 25 in 2015. It remains unclear, then, how a new government will be formed.

Ciutadans leader Ines Arrimadas offered a different take on the elections result in a speech, saying "the pro-secession forces can never again claim they speak for all for Catalonia. We are going to keep fighting for a peaceful co-existence, common sense and for a Catalonia for all Catalans."

"Today we have sent a message to the world: that the majority of Catalans feel Catalan, Spanish and European and will continue to do so," she added.

In October, Catalonia held an independence referendum to secede from Spain and declare themselves an independent republic. Madrid declared the referendum unconstitutional and its organizers seditious. They dissolved the regional parliament and called for snap elections to be held on December 21.

Puigdemont fled the country to Belgium while most of his lieutenants were arrested. Most have since been released on bail, but some, such as former Vice President Oriol Junqueras, remain imprisoned. Over 1,000 people were injured in clashes between Catalan demonstrators and federal police in the days following the referendum.

"There will be protests. Even if they send in police we will pursue the same democratic, peaceful path. We hope that Spanish authorities will come to their senses and bring back our president," he said.

Catalonia has desired independence for centuries, but the push has intensified in recent years following the near-collapse of the Spanish economy in the late 2000's. Catalonia, a major industrial center that makes up one-fifth of Spain's GDP, pays more to Madrid in taxes than they get back.