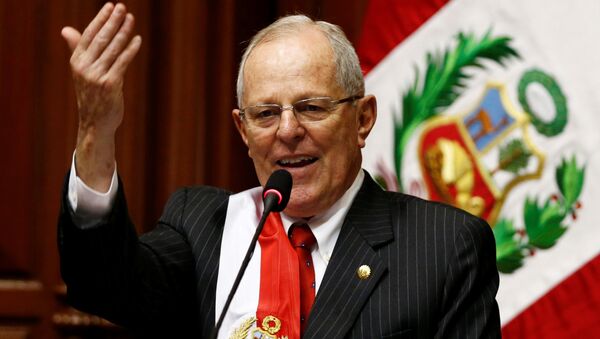 © REUTERS / Mariana Bazo
Subscribe
The disgraced tycoon who headed up Brazilian construction giant Odebrecht was freed from prison this week, but the corruption scandal he spawned could be about to claim another top Latin American politician. Sputnik spoke to Benedito Tadeu Cesar, Brazilian political scientist, about the ramifications of the scandal.

Marcelo Odebrecht, former CEO of the giant Brazilian construction firm which bore his name, was released from prison December 19, to begin a term of house arrest at his luxury home in an affluent Sao Paolo neighborhood.

But Peru's President Pedro Pablo Kuczynski faces being impeached on Thursday, December 21, after the populist party that controls the Peruvian congress, Popular Force, said he was "morally unfit" to govern after links emerged between the 79-year-old former Wall Street banker and Odebrecht.

President Kuczynski is the latest in a string of politicians across Latin America and as far away as Africa who have been embroiled in a graft scandal emanating from the Brazilian construction behemoth.

[Tweet: "I've decided to meet with the members of the Commission Lava Jato"]

The original Brazilian investigation, known as Operation Lava Jato (Car Wash), snowballed and in December 2016 Odebrecht admitted paying bribes to secure construction contracts in 12 countries and paid US$3.5 billion to Brazilian, US and Swiss prosecutors.

Benedito Tadeu César, a retired professor and coordinator of the political science program of the Federal University of Rio Grande do Sul, said corruption related to large construction firms in Brazil actually dated back to the 1950s and the building of the new capital city, Brasilia, but he said Odebrecht took it to another level.

Professor César said the Brazilian political system was partly to blame for Operation Lava Jato because there were so many political parties and a president could only govern with their support.

Odebrecht's notorious Division of Structured Operations, which was basically its bribery department, came up with a series of codenames for politicians and political parties.

The left-wing Workers' Party was known as Flamengo — after one of Rio de Janeiro's main soccer teams — while the center-right PMDB and PSDB parties were named after two other football clubs, Internacional and Corinthians.

Senator Humberto Costa was known as "Dracula", deputy state governor Cida Borghetti was dubbed "The Princess" and another politician, Jarbas Vasconcelos was christened "Viagra" because his wife was 40 years younger than him.

Among those who have been convicted as part of Operation Lava Jato was retired Brazilian navy admiral Othon Luiz Pinheiro da Silva, the father of the country's nuclear program, who was jailed for 43 years.

Nearly 80 Odebrecht executives and employees have agreed to give evidence to the authorities and dozens of politicians across Latin America and Africa are thought to be fretting about their testimony.

The scandal has tainted the administrations of former Brazilian President Luis Inácio Lula da Silva, his successor Dilma Rousseff and the current president Michel Temer, although all three have denied committing any crimes.

Professor César said under Lula and Rousseff 30 million Brazilians were raised out of poverty but he said it came at a price and that price was corruption.

He claimed there was evidence which suggested Operation Lava Jato was directed from outside Brazil.

"Justice Sergio Moro and former General Prosecutor of Brazil Rodrigo Janot have strong ties to US government organizations. US surveillance intercepted the communications of President Rousseff and her staff. What may be behind this is that Brazil is set to become the world's fourth largest oil producer following recent oil discoveries. Oil-based interests are very strong, they are international interests," Professor César told Sputnik. 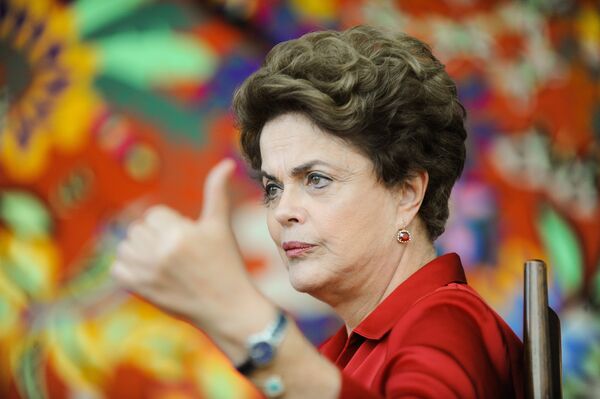 But whoever was behind the decision to expose the corruption, it has left an indelible stain on the minds of Brazilian voters.

"There is great distrust towards politicians and politics.  It is something mainstream media has contributed to for a very long time, from the very beginning of the Lula administration with the mensalão scandal in 2005," Professor César told Sputnik.

"There has been an effort to undermine politics and politicians along the lines of ‘all politicians are the same, corrupt, with wrongful intentions.' This causes great distrust and people distance themselves and become anarchic and feel there are no possibilities for change or different approaches," Professor César told Sputnik.

The views and opinions expressed by ​Benedito Tadeu César are those of the expert and do not necessarily reflect those of Sputnik.

000000
Popular comments
Te Dark Prince used to enjoy his trips to Rio de Janiero, but that was back when volcanic ash covered the sky.