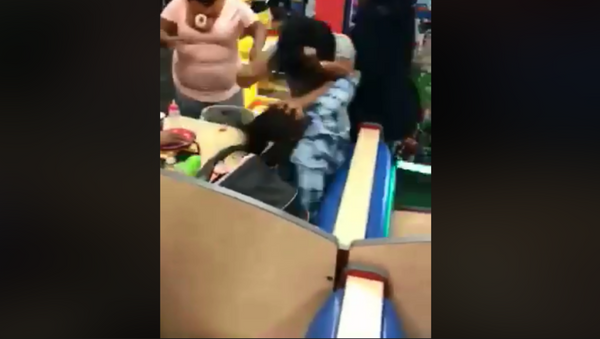 A family night meant to be filled with laughter and pizza turned dark Saturday after kids and parents witnessed a showdown between two women at an Indianapolis Chuck E. Cheese.

Filmed by Cujo Bailey, who was at the establishment celebrating his child's birthday, the video shows two unidentified women tossing punches and pulling each other's hair as shocked bystanders try to come to grips with the unfolding events.

Several people, including Chuck E. Cheese employees, are seen trying to break up the scuffle. However, once the two gladiators were separated, the yelling continued.

"Are you serious?!" a woman yelled after reminding one of the offenders they were at a Chuck E. Cheese.

Though what triggered the fight remains unclear, Bailey says it all started when the two women began yelling at one another.

"You just see them type of videos all the time now, so it kind of looks like the kind of stuff that you see on Facebook," Bailey told local Indiana news station WISH. "The lady came in yelling at the other lady, and they exchanged some words and the fight took off from there."

"If you go in there and try to break up the fight and the woman hits you, I mean you push the woman off and you hit her and then her husband jumps on you… then everybody's fighting," Bailey added. "It wasn't nobody really trying to sit around and watch a fight, but at the end of the day, you'd be crazy to jump in there."

Swedish Kindergartens Cut Windows in Toilets to Fight Pedophilia
Responding to the incident, the restaurant issued a statement praising the store manager's handling of the incident while also doubling down on its initiative to create a safe space for its customers.

"We want to assure our guests that we take great measures to protect the experience children and families have in our stores and we do not tolerate this kind of behavior," the Tuesday statement read. "Many of the measures we have in place — such as our Kid Check program, active camera systems and additional safety precautions — are transparent to our guests to encourage an environment Where a Kid Can Be a Kid."

Though local law enforcement was called to the restaurant when the fighting was still ongoing, the two women had already left the premises by the time they arrived. A police report has not been filed, news station WTHR reported.

This, unfortunately, is not the first time a fight has broken out at the otherwise-kid-friendly restaurant. In November, multiple patrons in Georgia got in a scuffle after a child accidentally bumped into another tot and in March a brawl ensued when several men and women fought over game tickets.