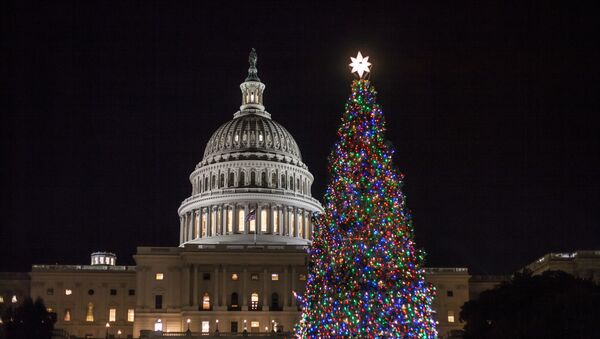 © AP Photo / J. Scott Applewhite
Subscribe
The House of Representatives will have to vote on the bill again later on Wednesday, since the legislation didn't comply with regulations on a simple majority in the Senate.

The US Senate has supported the disputed Trump tax reform bill, moving the GOP closer to the greatest tax overhaul in the country within the last 30 years, which will ease a major part of the tax burden on corporations and wealthy taxpayers, as well as small businesses of different scale, the NBC television channel, which held live broadcast of the vote, reported.

"We've had two quarters in a row of 3 percent growth. The stock market is up. Optimism is high. Coupled with this tax reform, America is ready to start performing as it should have for a number of years," Senate Republican leader Mitch McConnell stated after the vote.

However, a procedural gaffe has rained on the Republican parade, as the Senate had to remove three minor provisions in the bill and passed the legislation by a 51-48 vote, but it still needs to be reapproved by the House later in the day.

The tax cut reform, proposed by the US President, is aimed at raising the current 3 percent level of economic growth up to 6 percent, bringing the money "stuck overseas" back and to create jobs in the country.

The GOP, following the US President, views this bill as critical to defending their majorities both in the House and in the Senate during the mid-term congressional elections in November 2018. In order to ensure the legislation will come through Congress as fast as it can, it repealed a part of the Obamacare program and allows oil drilling in Alaska's Arctic National Wildlife Refuge.

Donald Trump has reacted to the vote on his Twitter, calling the reform "biggest in history Tax Cut and Reform Bill".

The United States Senate just passed the biggest in history Tax Cut and Reform Bill. Terrible Individual Mandate (ObamaCare)Repealed. Goes to the House tomorrow morning for final vote. If approved, there will be a News Conference at The White House at approximately 1:00 P.M.