Syrian Minister: Aleppo to Become 'Economic Gateway' as Airport is About to Open 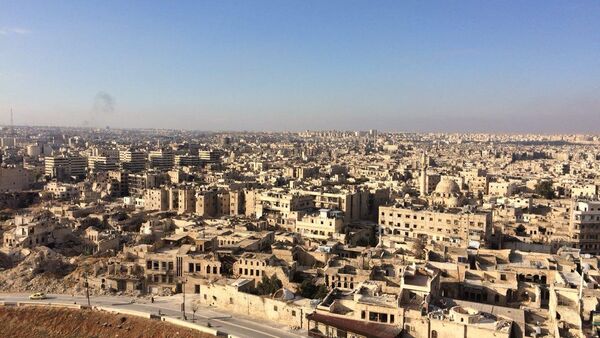 “The ministry has prepared everything necessary to begin work on the Aleppo international airport. Only final touches are left, and the airport will be ready to receive and send off flights when security situation around it improves. Aleppo will become an economic, trade and tourism gateway, this will revive the province and connect it with the world’s countries,” Hammoud said.

Syrian authorities are planning to construct a new airport in the country's capital in order to replace the old one built almost 50 years ago, Syrian Transport Minister added.

"The new airport will be constructed in Damascus. The existing airport was built in 1970 and has a small capacity. Taking it into account we are going to prepare a project for a new airport that will meet Damascus needs," Hammoud said.

The Syrian Minister said he considered the participation of Russian investors in Syria's transport industry to be of major importance for the Arab country, bearing in mind the scope of bilateral cooperation between the two states.

"The industry of transport is vital for Syria. We consider it necessary for our Russian friends to participate in the investment in this economic sector, particularly in light of the scope of cooperation between the countries and the possibility to take advantage of Russia's significant experience in transport industry — railway, maritime, terrestrial and aerial," Hammoud said.

According to him, Syria has requested the European Union to lift unilaterally-imposed sanctions on the Syrian Air company and allow flights between Damascus and Europe to resume, Syrian Transport Minister added.

"At an international transport conference in Geneva, we have asked for flights from Damascus to Europe to be resumed and vice versa, as well as the transit of flights over Syrian airspace. We have also asked for the ban [on flights] and discriminatory, tough sanctions, unilaterally imposed on the Syrian Air to be lifted," the Syrian minister said.

Syrian Minister of Transport Ali Hamud previously stated that war brought serious destructions to the Syrian infrastructure: the vital transport hubs, 50 automobile bridges, and 17 railway bridges were destroyed. As soon as a district was liberated from the terrorists, the specialists immediately begin to restore the destroyed infrastructure. As for future transport projects, the minister said that the priority lies in fixing the transport network within the country between its provinces at first. After that, the construction of the railway line to Iraq, Iran, Jordan, and possibly to China and Turkey is planned.

Currently, UN humanitarian activities have been underway aiming at restoring the previously besieged city. In particular, pre-war Aleppo served as Syria’s primary economic and manufacturing hub, with thousands of factories churning out a range of goods, including textiles and electronics.

In November 2017 the historic Khan al Jumruk market, that had been built in the 16th century, in the old town of Syria’s Aleppo reopened for the first time since the city’s liberation from terrorists.

December 22 will mark a one-year anniversary since the last militants left eastern Aleppo, resulting in the complete victory of the Syrian government forces, dubbed a "watershed event" by President Bashar Assad. At the same time, Russian military police were deployed in Aleppo in December 2016 and February 2017 to help maintain order after the liberation of the city by the Syrian army from militants.

The efforts helped many refugees who left Syria for other countries as asylum seekers to return to their homes in the country's provinces of Homs and Aleppo.