'A Kind of Surprise': Stein Finds Herself Targeted by Anti-Russia Smear Campaign 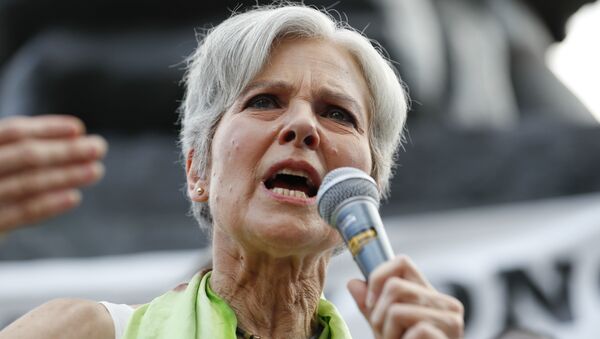 Former Green Party presidential nominee Jill Stein has found herself targeted by the ongoing "Russia collusion" probe. According to the politician, the ongoing smear campaign initially launched by the Democrats in 2016 to demonize Russia has turned into a bipartisan tool to silence and intimidate third parties.

Jill Stein, a former US Green Party presidential nominee, has fallen prey to the anti-Russian smear campaign focused on Moscow's alleged interference into the 2016 presidential election.

In a December 20 interview with Democracy Now! Stein underscored that while the Senate Intelligence Committee initially asked her and her campaign for documents as part of its inquiry into the alleged Russian meddling and was "very clear" that it neither targets nor blames the former Green Party presidential candidate, "suddenly the committee changed its story."

"And then suddenly when it hit the press two days ago this Senate Intelligence Committee changed its story and now, suddenly, we were being investigated for collusion," Stein highlighted. "So this has been a kind of surprise."

Senate Investigation Into Jill Stein Only ‘Criminalizing Diplomacy with Russia'
Recalling that the anti-Russia smear campaign was initially launched by the Democrats after the 2016 Democratic National Committee email leak that exposed collusion on the part of the Democratic party to sabotage Bernie Sanders, Stein stressed that currently it's a bipartisan effort, involving both Democrats and Republicans.

"It is a bipartisan benefit here smearing, intimidating and silencing third parties. In addition while for the Democrats this validates their framing of Russia as sort of the 'prime mover' and the major issue in our politics today. For the Republicans it enables them to say that the committee focused on someone else besides Trump," Stein said, commenting on the US mainstream media's recent attacks on her campaign.

It appears that the major fault with Jill Stein was that the politician attended a banquet sponsored by the Russian news agency RT in 2015 and sat at the table together with former national security adviser to US President Trump, Michael Flynn, and Russian President Vladimir Putin.

"I've explained a thousand times why I was at the table," Stein said. "We have been completely transparent all along here…. So, somehow, if the intelligence committees have failed to see it, you know, maybe they haven't done their homework yet."

World
RT Editor-in-Chief Glad There Are Concerns in US Over Interpretation of FARA
Commenting on the campaign against RT America, which was forced to register under The Foreign Agents Registration Act (FARA) in November 2017 following a demand issued by the US Justice Department, Stein suggested that the attempts to ostracize RT are "part of the effort to demonize, to vilify the social movements, who are likewise characterized as Russian assets."

Stein emphasized that her campaign "takes very seriously the issue of interference in the [2016 presidential election]." That is why the former Green Party nominee's campaign kicked off its own inquiry into the voting process, the so-called recount campaign.

According to Stein, it is necessary to find out whether voting machines or software were subjected to attacks by "foreign governments, gangster networks, or corporations that control voting software." She pointed out that either foreign or domestic meddling in the process of election would be equally inacceptable.

She warned, "It is very important that the [Russia] inquiry not become a launching pad for political intimidation and for effort to silence political opposition."

Speaking to Sputnik on Tuesday, David Cobb, Stein's 2016 campaign manager, explained that the ongoing smear campaign resembles nothing but "an example of a new era of McCarthyism."

Two separate investigations into the alleged Russian meddling in the US presidential election, dubbed a "witch hunt" by Trump, are being conducted by the US Congress, on the one hand, and the FBI and the Department of Justice under Special Counsel Robert Mueller, on the other hand.

The Kremlin has repeatedly denied the claim that Russian interfered in the US 2016 presidential campaign as groundless.