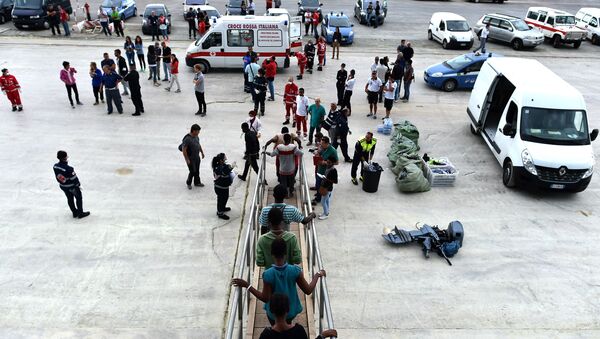 BRUSSELS (Sputnik) – The migration crisis is a time bomb planted under the European Union that is undermining the bloc’s standard of living, however, it is unlikely to result in its dissolution, Russia's Permanent Representative to the European Union Vladimir Chizhov told Sputnik.

"The very problem of migration is a time bomb with a rather short fuse, planted under the European Union. The European Union itself participated in the creation of this bomb," Chizhov said, adding that the situation is becoming increasingly tense with each passing month.

Chizhov recalled that he had heard the European Union was called "a superpower in the way of life."

The EU's migration policy is to be reviewed by EU leaders in Brussels on Thursday, with European Council President Donald Tusk expected to come with a proposal to allocate finances in order to solve the migration crisis through "stable" EU instruments.

The roots of the crisis date back to September 2015, when the EU agreed on a plan to relocate migrants and refugees coming to Italy and Greece among the member states on a quota basis to help ease the burden on these two countries. The system of mandatory relocation quotas has deeply divided the European Union, with the Visegrad group states — the Czech Republic, Hungary, Poland and Slovakia — rejecting the quotas and criticizing the open door policy promoted by Brussels.

Since then, the bloc's member states have been experiencing an acute migration crisis due to the influx of thousands of migrants and refugees fleeing violence in their home countries in the Middle East and Northern Africa.