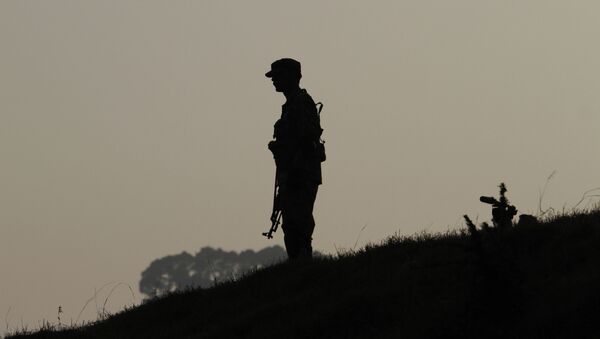 © AP Photo / Anjum Naveed)
Subscribe
India alleges that there has been a two-fold increase in ceasefire violations by Pakistani troops in 2017. Last week, India reportedly turned down the Pakistani foreign minister’s request for an independent verification of ceasefire violation allegations.

New Delhi (Sputnik) — A week after Pakistan accused India of turning down its "message for peace," India's Home Ministry has claimed that Pakistan violated the ceasefire 881 times since the beginning of 2017, the highest in the last decade.

"Pakistan has violated the ceasefire along the LoC (Line of Control) in Jammu and Kashmir 771 times till December 10 this year. Violations on the international border were 110 times till November this year," Hansraj Ahir, India's Minister of State for Home Affairs told the Lok Sabha (lower house of Parliament) on Wednesday.

Five Deadly Incidents Along Disputed India-Pakistan Border Occur in One Day
Earlier this month, Pakistan's Foreign Office spokesman Mohammad Faisal had claimed in his weekly briefing that India had committed over 1,300 ceasefire violations along the Line of Control in 2017, killing 52 of its nationals.

He further claimed that Foreign Minister Khawaja Asif, in a letter to his Indian counterpart, Sushma Swaraj, had urged that the 2003 ceasefire agreement be respected, but India's response was far from positive.

"India has responded to the letter and instead of accepting our message for peace, it has once again repeated old allegations of cross-border incursions and refused to stop violations," the spokesperson said.

India and Pakistan share a 3,323 km long border of which 740 km is demarcated as the Line of Control (LoC) and 221 km is recognized as the international border. The two sides had signed an agreement in 2003 to maintain the ceasefire along the LoC and the international border. There have since been frequent cross-border firings between the forces with the neighbors blaming each other for provocations.

The number of ceasefire violations attributed to the Pakistani forces by India is double the number recorded by India in 2016. In 2016, India had accused Pakistan of unprovoked firing on 449 instances.

India, Pakistan Agree to Exercise Restraint in Kashmir After Frequent Skirmishes
Pakistan has proposed giving access to the United Nations Military Observer Group in India and Pakistan (UNMOGIP) for an independent verification of ceasefire violation allegations by both sides, but India maintains that the UNMOGIP has outlived its utility and is irrelevant after the 1972 Simla Agreement and the consequent establishment of the Line of Control (LoC).

"A total of 34,445 visas were issued to Pakistani nationals in 2017. While the Home Ministry had issued 52,525 visas to Pakistan in 2016," the minister of state for home affairs, Kiren Rijiju, informed the Parliament.