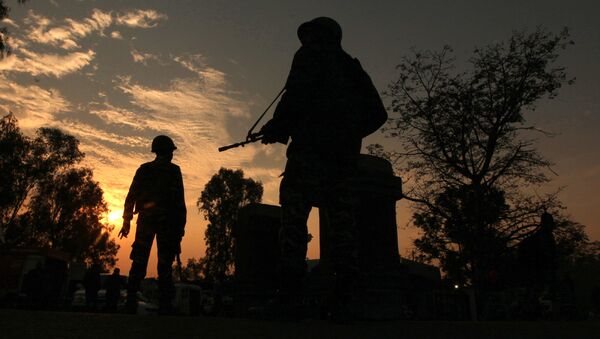 © AFP 2023 / STRINGER
Subscribe
International
India
Africa
Besides conventional warfare, Indian troops are rehearsing responses to chemical and nuclear threats. The drills are aiming to evaluate the capability of the armed forces to strike deep into enemy territory in the event of an integrated air-land battle.

New Delhi (Sputnik) — The Indian armed forces are conducting a major exercise along the border with Pakistan, exhibiting their preparedness to respond to any "provocation" by its neighbor. The massive show of military strength comes two days after Pakistan warned of a possible nuclear war.

The exercise is "unique in scope and scale" and being conducted in battle-like conditions, says the Indian Army.

"A large number of troops along with tanks and other armored vehicles duly supported by overwhelming land and air-based firepower have commenced conducting fully integrated operational maneuvers to validate their operational plans. The exercise is conducted in battle like conditions, aims at fine-tuning surveillance and destruction mechanisms to support precision strikes and maneuvers by network-enabled forces," Manoj Tuli, a top Indian Army official said in a statement.

"The stability of the South Asian region hangs in a delicate balance, and the possibility of nuclear war cannot be ruled out," Janjua was quoted as saying by the Pakistani media.

Furthermore, this is the first time that the Indian Army has revealed extensive details of a military exercise.

"With an emphasis on joint operations, the exercise would test robust sensors to shooter grids by employing a vast array of surveillance and air assets networked with land-based strategic and tactical vectors. Besides conventional warfare, troops will also be rehearsed to operate in the backdrop of chemical and nuclear contingencies," an Indian Army statement read.

The exercise involves new age aviation assets and armored vehicles, which are being overseen by a large number of senior officers of the Indian Army and the Indian Air Force.