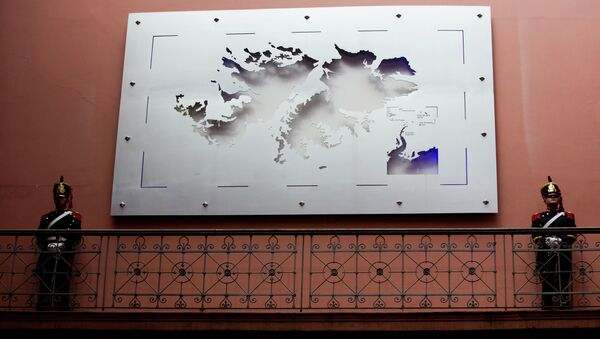 © AP Photo / Victor R. Caivano
Subscribe
A former UK ambassador to the UN has warned that British territorial claims around the world could come under increasing challenge as the country loses the diplomatic support of the European Union.

Lord David Hannay posited in reported comments December 19 in The Independent that the European Union may withdraw its support for the United Kingdom in its long-running dispute with Argentina over the Falkland Islands in the South Atlantic, among other places.

Britain and Argentina briefly went to war over the Falkland Islands in 1982 when the latter launched a surprise invasion of the territory. After ten weeks of fighting, Britain regained control of the islands.

The EU, then the European Economic Community, imposed sanctions against Argentina over the invasion due to the UK having joined the bloc more than a decade earlier in 1973.

The UK currently has several territorial disputes around the world which could be complicated by the process of Brexit.

The border between Northern Ireland and the Republic of Ireland has been one of the main sticking points in the Brexit negotiations between London and Brussels, as Dublin has repeatedly threatened to veto any agreement if it doesn't prevent the rise of a hard border across the island's north.

In a preliminary agreement reached with the EU on December 14 Theresa May undertook to ensure the border between the two countries would remain frictionless. The Democratic Unionist Party, who are Mrs. May's partners in government rejected a previous agreement they feared might leave Northern Ireland but not the rest of the UK in the EU Customs Union and Single Market, creating an effective border in Irish Sea and at least partially reuniting the island of Ireland.

The Irish Government of Prime Minister Leo Varadkar has become increasingly forceful in its negotiations, knowing it has the support of the other 26 EU member states.

Another territory whose status is complicated by Brexit is Gibraltar on the southern tip of Spain. Unlike other British territories, Gibraltar's exit from the EU does not seem to have been planned for.

Gibraltar will be covered in UK Brexit deal, confirms May… https://t.co/ZPtDA8AcuO

Originally captured by the British and the Dutch fleets in 1704 during the War of the Spanish Succession, Gibraltar was ceded by treaty to British sovereignty in 1713. Over the centuries Spain has repeatedly reasserted its claims to Gibraltar and while both countries are EU members, Brussels has stayed out of the dispute.

Britain is set to leave Union, while Spain will remain a member. The structure of the EU is such that states will vote alongside a fellow member.

Gibraltar Minister Confident UK Won't 'Sell Them Down the River' in Brexit Talks
Like Gibraltar, the Chagos Islands occupy a highly strategic location in the heart of the Indian Ocean astride some of the world's busiest shipping lanes. Its sovereignty is also disputed between Britain and the island nation of Mauritius.

In the mid-20th century the islands were depopulated by the British who deported the indigenous Chagossian population at the request of the Americans to accommodate the Diego Garcia air and naval base.

In June 2017 major EU member states including Germany, France, Spain and Belgium abstained from a UN vote on whether to refer the question of sovereignty to the International Court of Justice in the Hague. In portent of what may be to come, the EU members' abstentions were crucial in allowing the successful passage of the vote.