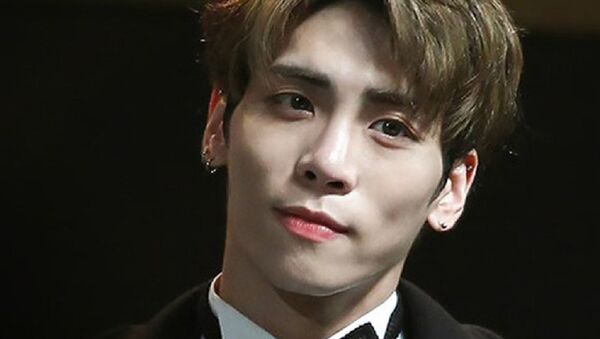 CC BY 4.0 / Im' Sorry / Jonghyun
Subscribe
The lead singer of the popular South Korean group SHINee, Kim Jonghyun was pronounced dead at the Konkuk University hospital at around 6:32 pm local time. He was 27.

According to Yonhap News, Kim Jonghyun was found unconscious at rented apartment in Gangnam around 6 p.m. local time. He was immediately taken to a hospital but died later at the medical facility.

Initial reports revealed that police found a frying pan with a brown liquid at Jonghyun's apartment. The police are investigating the incident.

Naver wrote, citing a police report that the last SMS-message Jonghyun sent was to his sister. According to the media outlet, the message read: "It was really hard until now. Please say good bye to everyone for me. Tell everyone that I was feeling really bad. This is my last message."

Jonghyun was a talented singer, song-writer and dancer. He joined the boy band SHINee, formed by SM Entertainment, in 2008. In  2015, Jonghyun made a successful solo debut with his first solo album "Base" released on January 12.

Recently, the 27-year-old had been suffering from a deep depression.

For example, in an October interview with Newseen he revealed the reason behind the self-composed song “Gloomy Clock” where the word “gloomy” is repeated 20 times. Jonghyun then said that he was becoming somewhat depressed due to his insomnia, so he "wrote down all the things that had happened that day; which is why the lyrics are similar to that of a diary entry."

SHINee's JONGHYUN WHY 😭😭😭I BET MANY PEOPLE AND FANS ARE CRYING AN OCEAN RIGHT NOW.

TELL ME THIS IS JUST A DREAM

WAKE ME UP FROM THIS NIGHTMARE

It's so hurt.. From such a big name like Shinee. I can't believe it

To every Shawol,
My heart aches for you have lost someone that is relly close to you or which you have loved ever since. Nevertheless please be strong because SHINee needs you in this grieving moment. Surely a Legend will be miss. #JONGHYUN

im still hoping it was a fake news. but still rest in peace, Shinee Kim Jonghyun! you will never be forgotten! 😭#RIPKimJongHyun

I grew up with shinee's song..this news really makes me feel loss 😔#goodbyejonghyun