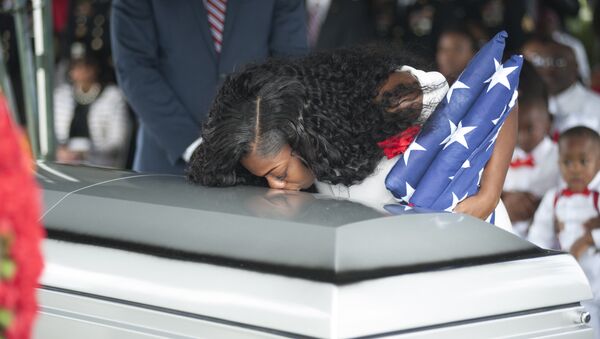 © AFP 2022 / GASTON DE CARDENAS
Subscribe
A recently-launched military probe has shed some light on the murky circumstances around the death of 25-year-old Sgt. La David Johnson, a soldier killed earlier this year in a Daesh-related ambush in Niger.

A military probe has proved that the officer continued to defend himself and two Nigerian soldiers up till the very moment he died, as reported by the AP.

It appeared that Johnson and his two fellow soldiers first managed to fight back and attempted to flee. While doing so, Johnson was caught in gunfire from far away. Officials familiar with the investigation noted that Johnson was hit as many as 18 times by a volley of M-4 rifle rounds.

The report goes contrary to earlier presuppositions that ranged from the sergeant being held as a prisoner or shot from a closer distance to being executed.

"The report has determined that [Johnson] was killed by enemy rifle and machine gun fire as he fled the attack by an offshoot of the Islamic State group about 120 miles north of Niamey, the capital of the African country. The attack took place Oct. 4; Johnson’s body was recovered two days later," the AP wrote.

In October, the fallen soldier’s widow, Myeshia Johnson, publicly grilled the government over the handling of her husband’s remains, saying they were passive in sharing the details she was interested in.

The widow came into spotlight following her controversial telephone call with Donald Trump. She promptly claimed part of it was disrespectful, as she allegedly heard him "stumbling" in an attempt to remember the soldier’s name, something she regarded as impermissible.