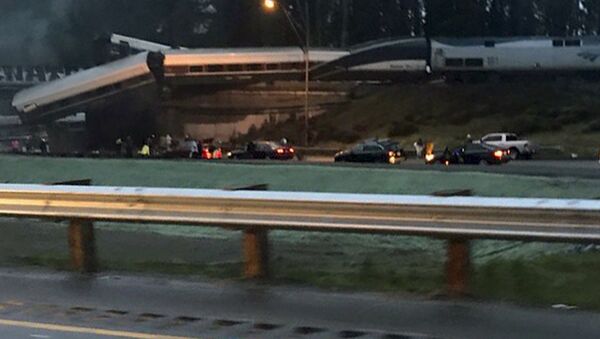 A major emergency response operation is currently underway, while the governor of the state has described the situation as "ongoing and serious." There were about 78 passengers and 5 crew members aboard, according to Amtrak.

A high-speed Amtrak passenger train has derailed near Tacoma in the US state of Washington, with the Pierce County sheriff's office saying that "injuries and casualties" were reported.

While the authorities are yet to release a statement on the exact number of casualties in the accident that took place before 8 a.m. local time 64 kilometers south of Seattle, a major emergency response has been underway after the train fell off a bridge that runs above a major interstate.

The Pierce County sheriff's department's spokesman told CNN that "there were some fatalities" as a result of the accident as at least one car fell of the bridge onto the highway.

According to AP citing a US official, at least 6 people were killed and many injured after the train derailed and partially fell off the bridge while traveling from Seattle, Washington to Portland, Oregon.

Media reports indicate that first responders are treating the situation as a mass casualty incident, with several cars still hanging from the bridge.

All SB lanes of I-5 blocked near Mounts Road in Pierce County due to derailed train car. Avoid area! pic.twitter.com/SBH7dCc6yg

Several cars on I5 struck by derailed Amtrak train cars. Multiple motorists injured on roadway, no fatalities of motorists reported.

Photos from the site released by social media users show that a part of the train is apparently hanging off the track.

#BREAKING: PHOTO: An Amtrak train has derailed near Olympia, Washington State. Part of the train hanging off the track onto I-5 below. Pic @naenae07 pic.twitter.com/WCVZEpzT4t

The ongoing situation involving the Amtrak passenger train that partially fell off a bridge above a highway is "serious," according to Washington Governor Jay Inslee's Twitter statement.

"Thank you to the first repsonders on the scene," Inslee said.

Thank you to the first repsonders on the scene. We're praying for everyone on board the train, and ask everyone to hold them in your thoughts. https://t.co/Zh3qJsFXVv

According to Amtrak's statement on Twitter, there were about 78 passengers and five crew members aboard the Amtrak train 501, adding that initial reports indicate "some injuries."

CBS News reported that four of the 77 people taken to hospitals were considered "level red" patients with the most severe injuries.

All southbound lanes of Interstate 5 have been closed south of Joint Base Lewis-McChord, with drivers being warned to avoid the area.

DuPont: This SB I-5 closure is a huge pinch point. Expect all alt routes to have heavy traffic. Here is one alternative that might work for you if you must drive. #I5MountsTrain pic.twitter.com/Yn4ZFBe9md

According to Reuters citing a news release from the state's transportation department that dates back to October, the accident has occured on the first day that Amtrak trains started using a new track between the cities of Tacoma and Olympia in order to reduce travel time.

An Amtrak train has derailed in Washington state. They fear mass casualties. These seems to happen frequently. The US really needs to start fixing it's infrastructure. Wow!