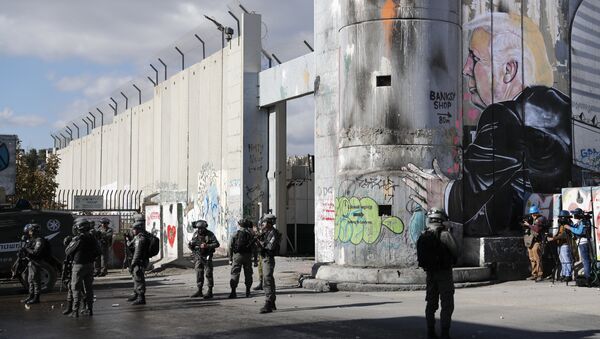 © AFP 2023 / THOMAS COEX
Subscribe
International
India
Africa
During the meeting, Palestinian leaders are unlikely to discuss the canceling of the recognition of Israel, but they are seeking a new strategy in the wake of US President Donald Trump’s move to declare Jerusalem the capital of Israel.

Senior Palestinian leaders will convene in Ramallah on Monday to discuss a new approach to relations with Israel, the United States and the international community.

"We don’t take Jerusalem lightly at all. What happened is a real game changer," Hanan Ashrawi, member of the Palestine Liberation Organization (PLO) Executive Committee, was quoted as saying by The Jerusalem Post.

She added the Palestine leadership has to "reformulate and rework" their strategy in the light of the recent development, especially the damage done to the two-state solution by Israel and the US.

"Since there is no peace process and the US has disqualified itself [from the peace process in the Middle East], we have to look for alternatives," Ashrawi said.

The meeting comes five days after Palestinian President Mahmoud Abbas called on the world’s nations to reconsider their recognition of Israel and called Trump’s decision on the status of Jerusalem a "violation of international law and UN Security Council resolutions." Abbas also called on the international community, especially European nations, to recognize Palestine within the pre-1967 borders.

According to the newspaper, some Palestinian leaders have been suggesting that the PLO cancel its recognition of Israel in response to Trump’s decision, but Ashrawi said she did not know whether such a proposal would be discussed at the meeting.

"People are free to present their own ideas and suggestions. That’s the nature of leadership meetings. I can’t tell you it will be presented, but some people are talking about this. Whether they will present it at the meeting or not is another thing," she said, adding that the key issues for discussion includes Palestine’s relations with Israel, the US and the international community.

'Trade of Fire': Israel Targets Hamas in Response to Rocket Attack
Another PLO Executive Committee member, Wasel Abu Yousef suggested that canceling the recognition of Israel will be discussed by the PLO Central Council which will meet in the near future.

On December 6, Trump announced the decision to recognize Jerusalem as the capital of Israel and instructed the State Department to start preparations for the transfer of the US Embassy from Tel Aviv to Jerusalem. The move has led to the aggravation of the Israeli-Palestinian conflict and clashes between the Palestinians and the Israeli police.

On December 12, Palestine’s Hamas movement announced the beginning of a third "intifada" against Israel.

Trump’s decision has also drawn international criticism, including over its negative consequences for the Israeli-Palestinian settlement. On December 8, the UN Security Council convened an emergency session to address Washington’s unilateral which has sparked global unrest. The UNSC is reportedly considering a draft resolution aimed at legally voiding any unilateral decision on the status of Jerusalem.

Israel and Palestine have been locked in a decades-long dispute over borders and sovereignty. Israel seized Jerusalem from Jordan during the Six Day War in 1967 and declared the city its capital. Palestine seeks to establish East Jerusalem as its own independent state's capital.