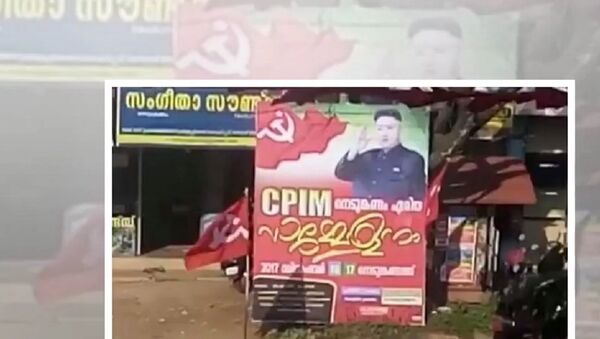 North Korea’s supreme leader Kim Jong-un is the new poster boy of the ruling Communist Party of India in the southern state of Kerala. In the past, the CPI-M has reportedly used images of Karl Marx and Vladimir Lenin on their posters, but that of Kim Jong-un's is definitely a first.

New Delhi (Sputnik) — The poster put up in Nedukandam in Idukki district, announcing the CPI-M area committee meeting, has armed the party's critics who have called it a flagrant insinuation of the CPI-M's approval of the North Korean leader's "belligerent" and "violent" ideas.

The Bharatiya Janta Party (BJP) of Prime Minister Narendra Modi has decried the posters, making it the subject of a national debate.

Kim Jong-un finds place in CPM’s posters in Kerala!!
No wonder they have converted Kerala into Killing fields for their opponents!
Hope the left is not planning to launch 🚀 missiles at the RSS,BJP offices as their next gruesome agenda! pic.twitter.com/6LHf1dVtAy

Insane dictator of N Korea, Kim Jong-un on CPM board in Kerala. Any one needs any explanation about the state Sponsored violence in Kerala pic.twitter.com/oZ8ZKGVs2E

The central leadership of the communist party has distanced themselves from the controversy but local leaders are justifying the poster as an attempt by the party to project its "anti-American" posture.

"Kim is the one and only communist leader who dares to challenge the US President Donald Trump. He is a die-hard fighter against American imperialism which has killed thousands while playing the role of the world's cop. For us, that's the most important thing. We do not consider other elements of Kim's personality," CPI-M district secretariat member P N Vijayan told the English Daily Times of India.

Kerala was the first Indian state to elect a communist party government in the year 1957. Over the years, the state has witnessed an ugly struggle between the left-wing parties and the saffron brigade (Hindu nationalists) that has been trying to wrest away power in this communist bastion.