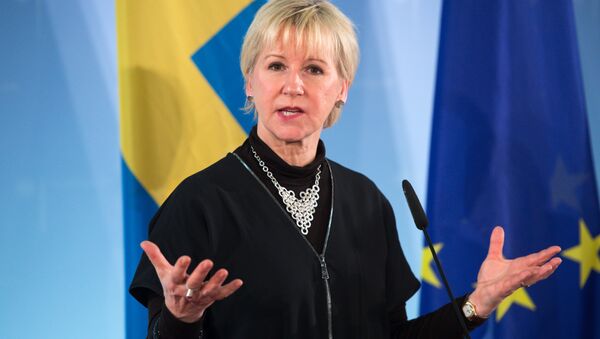 © AP Photo / Bernd von Jutrczenka
Subscribe
While Sweden may have campaigned on the basis of transparency during its campaign to win a seat at the UN Security Council, criticism is now being leveled at its foreign ministry, with allegations that it classified upwards of 900 pages about its campaign.

Sweden won its bid for a seat at the UN Security Council in June of 2016, based on a campaign platform vowing to make the Security Council more representative and transparent. However it is now coming to light that the Swedish foreign ministry may not have been so transparent about its successful bid, allegedly classifying almost 900 pages of its campaign documents, Swedish news website The Local reports.

Sweden Not Willing to Isolate Russia Despite Disagreements - Ambassador
The Swedish foreign ministry succeeded in withholding nearly 900 pages by setting up a parallel computer system on the government offices' intranet. This gave it the opportunity to classify the documents as work-related material, meaning they wouldn't be registered as official documents which can be requested for review, Swedish broadcaster SVT reports.

However, when the Swedish newspaper Dagens Nyheter launched an investigation into the documents, they were "released" after a three-week confidentiality examination. Of the nearly 900 pages involved, only 202 have been disclosed, and another 661 remain classified, reports The Local.

Dismissing allegations of a cover-up, the foreign ministry claims that this was not done with the intent to conceal details of its bid for a UN Security Council seat, but rather due to "carelessness" in their record keeping.

"It is alleged in some reports that UD [Sweden's foreign ministry] has "concealed" documents. This is not correct. That some documents have not been properly recorded is not due to such an intention, but carelessness — which we are addressing," Swedish Foreign Minister Margot Wallström writes on her Facebook page.

But not everyone is convinced by the dismissal of the allegation.

"I think that it is very remarkable. This is not the first time that the Foreign Ministry, along with a few other ministries, have set aside a constitutional responsibility, which it is for them," said Nils Funcke, journalist and professor of media law at the University of Stockholm, reports SVT citing Dagens Nyheter.

In response to the allegations, Sweden's opposition Moderate Party has reported Wallström to the Committee on the Constitution, a standing committee in the Swedish parliament.

"The Foreign Ministry's actions risk impacting Sweden's credibility. We campaigned for the Security Council with the slogan "openness" and this is the exact opposite. The Foreign Ministry seems to have both delayed the release of public documents as well as attempted to avoid other documents from becoming public," Karin Enström, foreign policy spokesperson for the Moderate Party told SVT.

Sweden Repeals Facebook's Tax Breaks, Slaps Network With Sizeable Bill
The Swedish Foreign Minister was called to a hearing with the Committee on Foreign Affairs in the Swedish parliament as result of details that came out about the withholding of information about the campaign for the seat at the Security Council, reports SVT.

While the hearing took place on Thursday, details are yet to surface as to what was said. One Swedish political blog suggests that the relationship between the political leadership and the civil servants within the ministry is tense. This is due, the blog goes on to say, to the politically responsible chief civil servants blaming the foreign ministry's employees for the debacle, despite an explicit directive that a parallel work space was to be used for the campaign.

During the summer of 2016 Sweden ran a successful campaign in a bid to win one of the seats at the UN Security Council. The country ran on a platform to make the Security Council more representative, transparent, and effective. Along with Sweden, Kazakhstan, Ethiopia and Bolivia were also elected to Security Council seats.