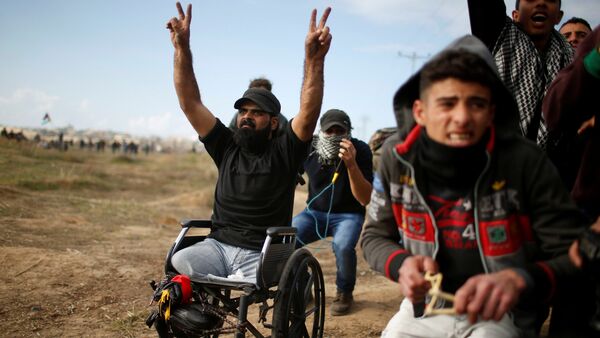 © REUTERS / Mohammed Salem
Subscribe
At least 150 Palestinian protesters were injured during clashes with Israeli forces near Gaza City on December 15, in response to an earlier decision by US President Donald Trump to recognize Jerusalem as Israel's capital.

His killing immediately caused an international outcry, with Jerusalem-based journalist Nasser Atta writing on his Twitter page that the death of Abu Thuraya may result in the third intifada. Thuraya lost his legs during Israel's Operation Cast Lead in 2008.

Talking to many #Palestinians tonight they say killing of Ibrahim, who is double amputees as a result of #Gaza war, will be the beginning g of the start of a third intifada, they compare him to Mohammed al Dura killed in the second Intifada. #Trump pic.twitter.com/iR3uyNhNuw

Social media users expressed outrage at Thuraya's killing and squarely pointed the finger at the Israeli troops. According to them, Thuraya was not carrying any weapons and did not pose a threat.

Ahead of Gaza protests, Thuraya reportedly said that "this land is our land."

"We are not going to give up. America has to withdraw the declaration it has made," he underscored.

Israeli Defense Force (IDF) officials, for their part, said that they are investigating the death of Thuraya, who was shot and killed after an Israeli officer noticed that Thuraya was wearing "what appeared to be a suicide belt," the Times of Israel newspaper reported.

Earlier, the Israeli military said in a statement that "during the violent riots, IDF soldiers fired selectively at the main instigators."

Even a psychiatrist can't help you if you think it's OK to kill an unarmed disabled man who was defending his land by stones.
Ibrahim Abu Thuraya 💔 pic.twitter.com/12LKUroh7X

About 2,500 Palestinians took part in the riots, during which they threw firebombs and rocks at soldiers and border police, who had to retaliate, according to the Israeli military.

Ibrahim Abu Thuraya, is now a name and a legend in the Palestinian liberation movement.

First he lost his legs in Israel’s aggressive war on #Gaza and today he was killed in cold blood by an Israeli sniper with a shot to his head.

He used to protest in any way the occupation pic.twitter.com/EF6F0DAp0x

In early December, Palestinian Ambassador to Russia Abdel Hafiz Nofal told Sputnik that Trump's recognition of Jerusalem as Israel's capital "will start another intifada and will lead to the deterioration of US relations with other Arab and Muslim states."