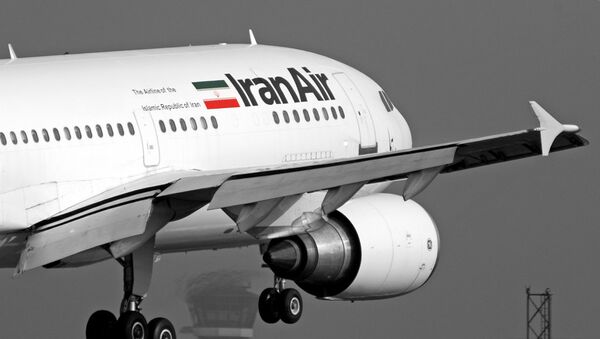 © Flickr / Pieter van Marion
Subscribe
International
India
Africa
If the White House moves forward with new restrictions, the US aerospace giant and its European counterpart Airbus would stand to lose tens of billions of dollars in sales.

The Trump administration is set to look at a variety of options to block the sale of dozens of Boeing and Airbus passenger planes to Iran, the Wall Street Journal reports, citing US officials familiar with the proposals.

According to the newspaper, Trump advisers are expected to present the president with a number of options, including banning the sale of the aircraft to Iran outright, imposing stringent conditions on the sales, or stalling deliveries. Officials familiar with the matter said it was unclear which option Trump may favor.

World
Neighborly Bickering: Canada Ups Ante in Trade Battle with US, Boeing
Amid escalating tensions between Washington and Tehran over US claims that it has evidence of Iranian arms deliveries to Yemen's Houthi militia, which is fighting against a Saudi-led military intervention in that country, the Trump administration is concerned that Iran could use its new passenger airliners to ferry weapons and military personnel, including to its allies in Syria.

"The administration's position is clear," a White House National Security Council spokesperson told the WSJ. "We will not issue export licenses unless we are convinced the aircraft will be used exclusively for commercial passenger aviation."

If implemented, the restrictions would jeopardize one of the main benefits gained by US and European companies after the signing of the 2015 Iran nuclear agreement, namely the sale of some $40 billion worth of passenger aircraft to the Middle Eastern country. The commercial deals include a $16.6 billion contract with Boeing for the sale of some 80 passenger planes, the first of which are scheduled to be delivered sometime next year.

A spokesman from Boeing, which is also one of the US's largest defense concerns, said that for the moment, the company remains authorized to sell the planes, but "will continue to follow [Washington's] lead with regards to all of our activities with Iran."

Russia
MC-21, Russia's Answer to Boeing, Performs Its Maiden Flight (PHOTO, VIDEO)
Airbus, which has a $10 billion deal with Air Iran for the sale of 100 jetliners, may be impacted because some components of its aircraft are manufactured in the US, the WSJ said.

In related news, Trump now has until mid-January to decide whether to extend sanctions relief to Iran, or risk breaking the terms of the Iran deal. On Thursday, US United Nations ambassador Nikki Haley reiterated Washington's earlier claims that Iran was a state sponsor of terrorism, and warned Tehran that the US would "build a coalition" to "push back" against Iran.