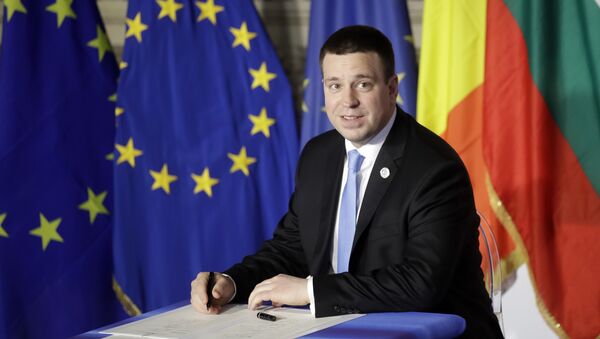 © AP Photo / Alessandra Tarantino
Subscribe
Estonian Prime Minister Juri Ratas praised on Friday the progress reached by the parties to the negotiations on the UK withdrawal from the European Union.

TALLINN (Sputnik) — Earlier in the day, European Council President Donald Tusk said that the EU leaders had agreed to move on to the second phase of the Brexit negotiations.

"I am glad that we are moving into the next stage in the Brexit negotiations, where we will be discussing trade, aviation, fishery, legal cooperation, defense policy and other topics with the United Kingdom," the prime minister said.

What Else is UK Brexit Department Hiding From Brits After FOI Requests Ignored?
He pointed out that further talks would not be easy.

"I am not going to deny that the talks ahead of us will be complicated. The current relationship between the European Union and the United Kingdom was built over the course of 44 years, our lives are closely intertwined. But we have just a few years to build a new relationship. A transitional period is needed, which will hopefully ensure a softer landing for the institutions and enterprises of both the European Union and the United Kingdom," Ratas said.

"Around 10,000 Estonian citizens living in the United Kingdom gained certainty that their lives will continue as before… However, this is still an agreement of honor, which must be formalized as a legally binding contract. The following negotiations on the future relations will also depend on how the agreements of the previous tier are respected," Ratas added.

Brexit negotiations between the United Kingdom and the European Union started on June 19, and are due to be completed by the end of March 2019.