'American Idea': Trump Claims US 'on the Verge of a New Economic Miracle' 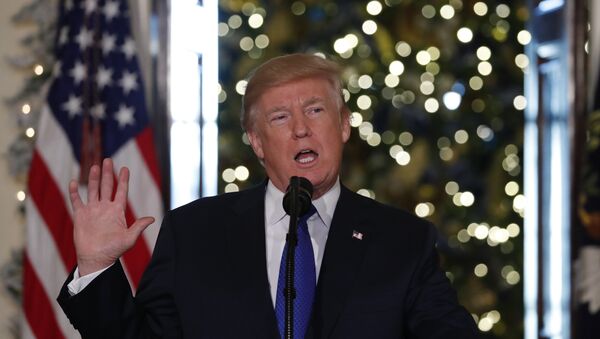 © REUTERS / Carlos Barria
Subscribe
President Donald Trump has announced that Republicans in the US Senate and House of Representatives have clinched a deal on the 2018 tax proposal and were very close to getting a final agreement.

During his speech on US tax reform, President Donald Trump pointed out that his country stands on the threshold of an economic breakthrough.

"Today we stand on the verge of a new economic miracle. Our economy has already surged to 3 percent growth … We've created 2.2 million jobs since the [2016 presidential] election; unemployment is at a 17-year low," he said.

Trump pledged to make the US economy "work for you again", referring to four middle-income American families who were in attendance at the White House during his speech.

He recalled that reducing taxes "is neither a Republican or Democrat idea, but an American principal and an American idea."

He added that if Congress sends the bill on tax cuts for him to sign before Christmas, the US citizens would "see lower taxes and bigger paychecks beginning in February."

The vote on the final tax bill will likely take place next week, according to media reports.

Besides the 21 percent corporate tax, the current version of the tax reform bill includes a provision that would lower the top tax bracket, which applies to America's wealthiest earners, to 37 percent.

At the other end of the scale, the GOP deal would double the standard tax deduction to $12,000 for individuals and $24,000 for families, meaning that a couple living on $2,000 per month would pay nothing in US federal income taxes (although this doesn't apply to Social Security or Medicare contributions), according to the NBC News.

Trump has advocated lowering the tax rate for companies to 20 percent, arguing that the tax reform would allow businesses to expand, therefore contributing to economic growth.

Trump's critics in turn argued that the US President aimed to give tax breaks to corporations and the wealthy, and that implementing his tax proposal would increase the US national debt and affect the country's healthcare system.

000000
Popular comments
More of the same old conservative silly tax game of lowering taxes and raising debt in return for a devalued dollar.