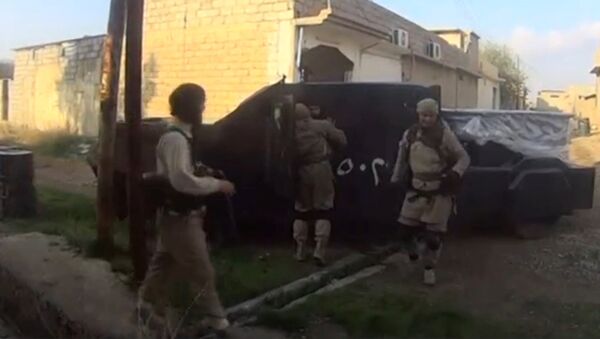 According to Conflict Armament Research (CAR) organization, US arms related to the Syrian opposition groups regularly end up in the hands of Daesh militants.

WASHINGTON (Sputnik) — Conflict Armament Research (CAR) said in a newly published report that the weapon — anti-tank miisile — was manufactured in the EU, sold to the United States, supplied to a party in the Syrian conflict, transferred to Daesh forces in Iraq, and documented by a CAR field investigation team following its recovery from Daesh forces. The full chain of transactions occurred within two months of the weapon’s dispatch from the factory.

The CAR report, titled "Weapons of the Islamic State," represents a three-year study conducted between July 2014 and November 2017 and reveals the most comprehensive and verified study to date on Daesh weapons. CAR analyzed more than 40,000 items recovered from Daesh, including weapons, ammunition, and chemicals used to manufacture improvised explosive devises. Most of the weapons Daesh obtained through unauthorized retransfer were supplied to the Syrian opposition by the United States and Saudi Arabia, the report found.

These findings support widespread assumptions that Daesh terrorists in Syria captured most of their weapons and ammunition from Iraqi and Syrian government forces, the report said.