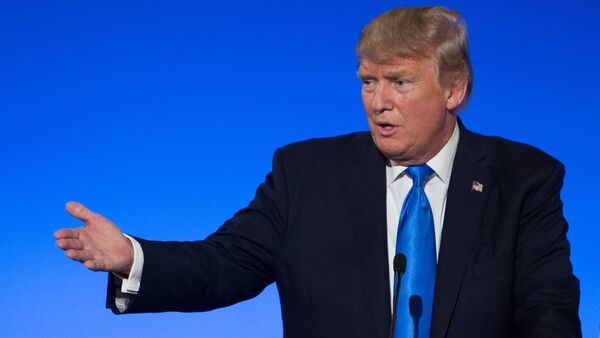 © Sputnik / Irina Kalashnikova
/
Go to the mediabank
Subscribe
International
India
Africa
The recent statement of US President Donald Trump on recognition of Jerusalem as the capital of Israel has significantly undermined the reputation of the United States as "global power," Russia's senior lawmaker told Sputnik.

MOSCOW (Sputnik) — On December 6, Trump announced his decision to recognize Jerusalem as the capital of Israel and instructed the US Department of State to relocate the US embassy from Tel Aviv. The decision caused criticism from many countries around the world, first of all in the Middle East. Earlier on Wednesday, Organization of Islamic Cooperation (OIC) reportedly said that Washington had lost its role as a mediator in Middle Eastern settlement after this move.

"Indeed, one Trump's move in fact has transferred his own state from the list of mediators to the category of if not participants then allies of one of the parties to the violent Middle Eastern conflict. He had thus fueled the tensions and at the same time has significantly damaged the US reputation as a global power," Konstantin Kosachev, the chairman of the Russian upper house’s Foreign Affairs Committee, said on Wednesday.

Erdogan Calls Israel 'Terrorist State', Insists Jerusalem is Palestine's Capital
The lawmaker said that the OIC in its statement put the responsibility for the outcome of the US move on Washington, adding that the consequences could be very serious. According to the Russian official, there is no need to make spiteful comments amid the US difficulties, as other states should take steps to tackle the tensions caused by the US activities.

Meanwhile, Trump’s overall approval rating has fallen to its lowest level of his presidency, with women voters especially skeptical of the president’s performance and widespread disapproval of the decision to move the US embassy in Israel to Jerusalem, according to a poll by Monmouth University on Wednesday.

Netanyahu Rebuffs OIC Remarks on Jerusalem, Urges Palestine to 'Accept Reality'
The president's decision on Jerusalem was not very popular, with just 23 percent calling the move a good idea, compared with 39 percent who say was is a bad idea and 38 percent registering no opinion.

Israel seized then Jordan-controlled East Jerusalem during the 1967 Six-Day War. In 1980, the Israeli parliament adopted the Jerusalem Law and proclaimed the city as the "complete and united" capital of the country. The international community does not recognize the annexation and considers the status of the city to be one of the core problems of the Middle East conflict, which should be resolved on the basis of an agreement with the Palestinians, which claim the eastern part of Jerusalem. For this reason, all foreign embassies are located in Tel Aviv.