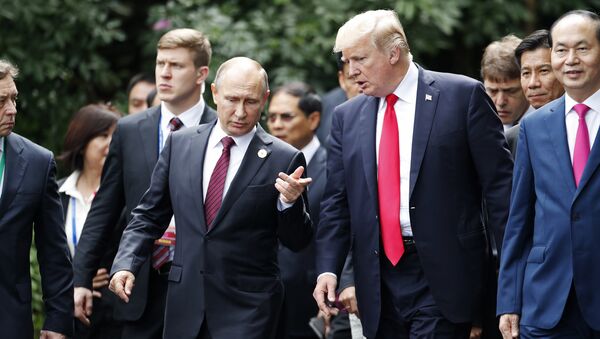 Russian President Vladimir Putin and US President Donald Trump held a phone call on Thursday to discuss “urgent issues” in diplomatic relations between Moscow and Washington.

"Urgent issues of the bilateral agenda were discussed, as well as the situation in hot spots with a focus on the Korean nuclear settlement," the Kremlin said December 15.

World
Kremlin on Trump's Call for Joint Work on N Korea: In Line With Moscow's Stance

According to the Kremlin statement, the call was held at the request of the US, and both nuclear powers agreed to continue bilateral contacts. The pair last chatted November 21 to discuss the Russian president's meeting with Syrian President Bashar al-Assad.

Responding to a journalist at an annual press conference Thursday, Putin said Trump has made some "serious achievements" while in office, judging by objective metrics such as market data. "Look at the markets, how they've risen," Putin said, according to Bloomberg. "That shows investors' confidence in the American economy, it shows they believe in what President Trump is doing in this area."