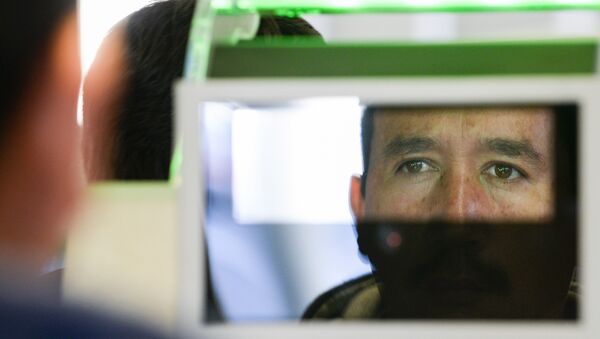 © AP Photo / Denis Poroy
Subscribe
The regional government in China’s westernmost Xinjiang Province is expanding its biodata collection project to include the DNA, fingerprints, iris signatures, and blood types of all people between the ages of 12 and 65, according to a new report.

One way the government of Xinjiang will gather some of this data is through the free Physicals for All program. During the physical, DNA and blood type data will be gathered, according to Human Rights Watch, which published the biodata collection report in December 13.
Critics maintain that the program is basically a way for the police to gather sensitive information from people while masquerading as a public health initiative.

"Xinjiang authorities should rename their physical exams project ‘privacy violations for all,'" says Sophia Richardson, China director at HRW, since informed consent and substantive choice do not seem to be an aspect of Physicals for All.

"The mandatory databanking of a whole population's biodata, including DNA, is a gross violation of international human rights norms," Richardson said, noting that the practice is "even more disturbing if it's done surreptitiously, under the guise of a free health care program."

The program was authorized under a policy document called "The Population Registration Program," put into effect by the Xinjiang government in February, 2017. Previous data collection only required passport applicants into Xinjiang to submit biometric data, according to the human rights group.

According to recent data from the Chinese National Bureau of Statistics, the remote, desertous Xinjiang is one of the poorest provinces in China. Uyghurs in China have presented an Islamic extremist terrorism problem, officials in Beijing have said.

In March, the South China Morning Post reported that the "terrorism threat transforms China's Uyghur heartland into security state," where store owners are required to respond to loud sirens three times a day and stand outside their shops wielding wooden clubs to "fight off imaginary knife-wielding assailants."

An Uyghur individual told HRW that a neighborhood committee "demanded that they [people in his neighborhood] must participate in the physicals," adding that "no participating would surely be seen as a sign of [a] ‘thought problem,'" or political disloyalty.

000000
Popular comments
too bad for people

juanm82
14 December 2017, 08:19 GMT2
000000
No one want to do business in Uighur is a province in the east that has so much potential but is riddled with violence from religious views and foreign intervention. It's their own fault. There is a reason why shop owners have drills and that is to protect themselves and their shops from attacks and looting. And as far as the biometric and DNA database, that is China and no one other than westerns complain. It is when our own Governments in places such as in Canada all of a sudden do it for malicious means uour Governments under a shroud of secrecy. I would love to have my DNA and biometrics in a database For payment systems, health reasons and so on. However, today, I would be afraid if my own government did this because I think of them as an evil corporation that are out to exploit its citizens for sinister reasons, such as corruption, secrecy, rule the world and I,posing a common set of values they determine through lobbying, on a diverse population.
Rokenbok
14 December 2017, 03:59 GMT1
000000
Newsfeed
0
New firstOld first
loader
LIVE
Заголовок открываемого материала
Access to the chat has been blocked for violating the rules . You will be able to participate again through:∞. If you do not agree with the blocking, please use the feedback form
The discussion is closed. You can participate in the discussion within 24 hours after the publication of the article.
To participate in the discussion
log in or register
loader
Chats
Заголовок открываемого материала
Worldwide
InternationalEnglishEnglishMundoEspañolSpanish
Europe
DeutschlandDeutschGermanFranceFrançaisFrenchΕλλάδαΕλληνικάGreekItaliaItalianoItalianČeská republikaČeštinaCzechPolskaPolskiPolishСрбиjаСрпскиSerbianLatvijaLatviešuLatvianLietuvaLietuviųLithuanianMoldovaMoldoveneascăMoldavianБеларусьБеларускiBelarusian
Transcaucasia
ԱրմենիաՀայերենArmenianАҧсныАҧсышәалаAbkhazХуссар ИрыстонИронауОssetianსაქართველოქართულიGeorgianAzərbaycanАzərbaycancaAzerbaijani
Middle East
Sputnik عربيArabicArabicTürkiyeTürkçeTurkishSputnik ایرانPersianPersianSputnik افغانستانDariDari
Central Asia
ҚазақстанҚазақ тіліKazakhКыргызстанКыргызчаKyrgyzOʻzbekistonЎзбекчаUzbekТоҷикистонТоҷикӣTajik
East & Southeast Asia
Việt NamTiếng ViệtVietnamese日本日本語Japanese俄罗斯卫星通讯社中文（简体）Chinese (simplified)俄罗斯卫星通讯社中文（繁体）Chinese (traditional)
South America
BrasilPortuguêsPortuguese
NewsfeedBreaking
11:15 GMTMassive Plume of Smoke Reportedly Spotted Rising From Major US Base in Iraq - Video
11:13 GMTFrance Hardens Visa Rules for Moroccans, Algerians, Tunisians
11:05 GMTMan Who Threw Egg at Macron Admitted to Psychiatric Hospital
10:44 GMTGeorgina Rodriguez Desperate to Be Cristiano Ronaldo's Wife, Waiting for Man Utd Star to Propose
10:27 GMTTrump Facing Possible Criminal Liability For ‘Sustained Assault’ on Georgia’s Electoral Vote Count
10:25 GMTMilley Preps for Congressional Grilling Over ‘Treasonous’ Phone Call to PLA Head Behind Trump’s Back
10:17 GMTMoscow Calls on NATO, EU to Urge Pristina to Withdraw Forces From Kosovo and Prevent Escalation
10:15 GMTEuropean Parliament President Says German Elections Testify to Stability of Europe
10:12 GMTKremlin Sees No Reason for Ukraine to Be Hysterical About Russian-Hungarian Gas Contract
10:01 GMTCampaign Ads Offering 'Russian Virgins & Cocaine' on a Menu Outrages Embassy in Spain
10:00 GMTUK's Labour Party Blames Government for Fuel Crisis
09:08 GMTFrench Sanofi Gives Up mRNA COVID-19 Vaccine Development Over Saturated Market
08:42 GMTUK to Start First Round of Talks on Joining Trans-Pacific Trade Bloc
08:40 GMTTwitter Frenzy as UEFA Scraps Decision to Fine European Clubs for Launching Super League
08:36 GMTHaiti Dismisses Highly-Criticized Electoral Council, Prime Minister’s Office Says
08:34 GMTBeijing on Exclusion From Dukovany NPP Project: We Hope Prague Will Respect Market Rules
08:30 GMTDemi Lovato Opens Up About 'Warm and Loving' UFO Interaction
08:27 GMTBudapest Summons Kiev's Ambassador to Discuss Reaction to Gas Deal With Russia, Reports Say
07:58 GMTYouTube Removes Content 'Casting Doubt Over Elections in US, Germany'
07:56 GMTPolice Chief in Utah Takes Leave of Absence Amid Gabby Petito 911 Call Handling Probe