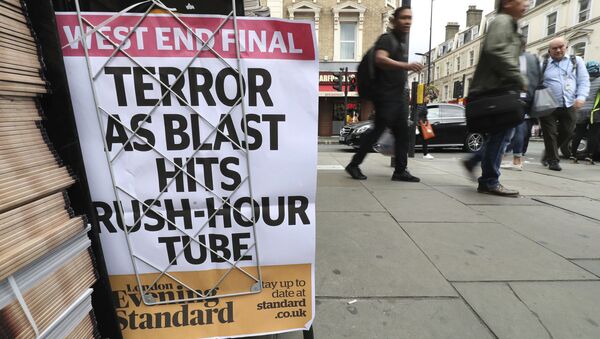 © AP Photo / Andrew Matthews
Subscribe
International
India
Africa
The UK's former foreign intelligence agency chief has suggested the risk of being killed or injured in a terrorist attack are meager, and public fears have been artificially magnified by media overreaction. He is perhaps the most prominent Western figure to acknowledge what many academics have noted for some time.

"The chances of getting caught up in a terror attack, even when the [terror threat] is high, are relatively low. The problem is, when attacks happen, they're shocking and catastrophic, and of course you get a massive media reaction to them. We need to keep a sense of proportion…terrorism in its current form does not represent a systemic threat to the nation — it presents the possibility of horrible happenings, which we are learning how to deal with," Sir Dearlove said.

Former head of MI6 Sir Richard Dearlove’s interview where he says terrorism does not present a "systemic threat" to UK is a welcome word of moderation in a country where securitisation has been allowed carte blanche by vested interests, and no one dares to challenge that mantra.

His comments stand in sharp contrast to those of Andrew Parker, current director general of MI5, in October — the domestic intelligence leader said the UK faced its most severe terror threat in history.

"That threat is multi-dimensional, evolving rapidly and operating at a scale and pace we've not seen before. It's at the highest tempo I have seen in my 34-year career," Parker alleged.

In all, terrorist attacks have claimed the lives of 35 in four separate strikes in the UK in 2017 — in May, 22 were killed at an Ariana Grande concert in Manchester by a suicide bomber, in June three men in a van drove into revelers on London Bridge and began stabbing passersby in the Borough Market area, before being gunned down by police marksmen, in September a bomb went off on a Tube train at Parsons Green in west London, injuring several. 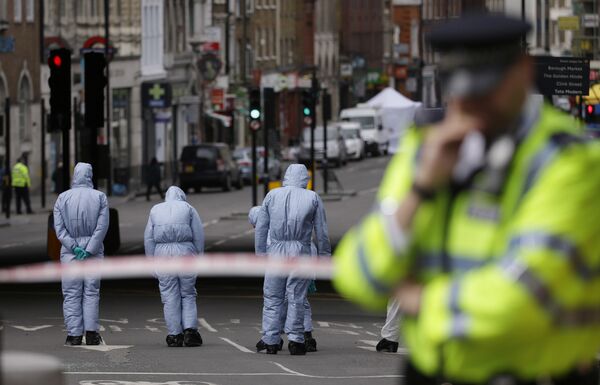 Forensic police investigate an area in the London Bridge area of London, Monday, June 5, 2017.
© AP Photo / Alastair Grant
Moreover, official figures on arrests under the 2000 Terrorism Act over 2017 were released December 7, indicating the number of people arrested in the UK for terror-related offenses stood at 400 over 12 months, a 54 percent year-on-year leap.

However, beyond the headline figures lurks a more complex picture. Of the 400 arrestees, a mere 115 were actually charged — 28.7 percent of the total — of which 18 were for non-terrorist offenses, meaning just under a quarter (24.25 percent) were actually guilty of terror offenses.

'To Arm or Not to Arm?' Survey Asks UK Police Amid Europe Terror Threat
Furthermore, while the specifics of these arrests were not disclosed, previous cases have demonstrated arrests for terrorism offenses often result from would be perpetrators' ineptitude.

For instance, in June 2012 five extremists planned to bomb a rally held by the controversial English Defence League group, but arrived after it had ended. While driving back to their hometown of Birmingham, their vehicle was stopped by traffic police for having no car insurance, and their explosives cache found.

Similarly, in February 2015, IT worker Mohammed Ammar Ali attempted to buy 500 miligrams of ricin, which could kill as many as 1,400, using the darkweb. His research into how to buy the substance — along with other potentially lethal substances, such as cyanide, castor beans and hydrogen peroxide — via traditional internet resources on his mobile phone and home computer had been noted by authorities, and he was instead sent an innocuous white powder by the FBI, and subsequently arrested.

In July that year, Mohammed Rehman and Sana Ahmed Khan were sentenced to life imprisonment for preparing an act of terrorism, intended to mark the ten year "anniversary" of the 7/7 attacks in London. The pair had 10 kilograms of urea nitrate in their possession, and took to Twitter to ask people publicly where they should strike — the Westfield Shopping Centre or the London Underground.

The incompetence of many aspiring terrorists was noted by American political scientists John Mueller and Mark G. Stewart in a 2012 study. The pair analyzed 50 cases of supposed "Islamic terrorist plots" against the US, and showed virtually all of the perpetrators were "incompetent, ineffective, unintelligent, idiotic, ignorant, unorganized, misguided, muddled, amateurish, dopey, unrealistic, moronic, irrational and foolish."

They quoted former Glenn Carle, former deputy national intelligence officer for transnational threats, who said the public "must see jihadists for the small, lethal, disjointed and miserable opponents that they are," and understand terrorists' capabilities are "far inferior to [their] desires."

Asia
Terrorism Threat Pushes Tokyo 2020 Olympics Six Times Over Budget
Mueller and Stewart also estimated expenditure on domestic terrorism fighting efforts had increased by over US$1 trillion in the decade since 9/11, even though the annual risk of dying in a domestic terrorist attack was about 1 in 3.5 million. Using conventional risk-assessment methodology, they estimated for this exponential rise in spending to be cost-effective, authorities would've needed to deter, prevent, foil or protect against "333 very large attacks that would otherwise have been successful every year."

"The exaggerations of the threat presented by terrorism and the distortions of perspective these exaggerations have inspired, have in turn inspired a determined and expensive quest to ferret out, and even to create, the nearly nonexistent," the pair concluded.