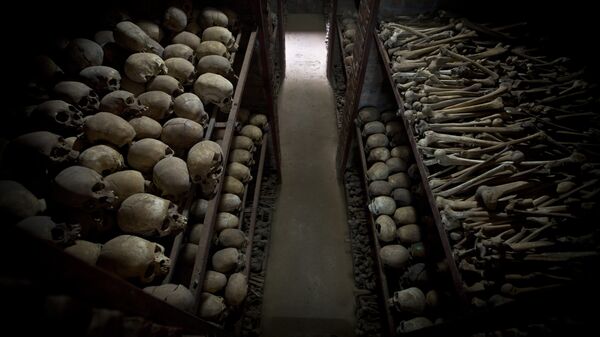 A US law firm contracted by Kigali has released a new report reminding Frace of their complicity in the 1994 Rwandan genocide that claimed an estimated 800,000 lives in a 100-day period.

The report was compiled by Washington-based law firm Cunningham Levy Muse LLP, and it claims that France armed and abetted the perpetrators of the genocide. Senior French officials "were aware of and aided the actions and goals of both the Habyarimana government and the génocidaires who seized power after at the inception of the genocide against the Tutsi," the Muse report concluded.

Juvénal Habyarimana was the dictator of Rwanda from 1973 to 1994, his totalitarian regime backed and funded by Paris. He was assassinated in 1994, and his death was blamed on the nation's Tutsi minority.

Rwandan military leaders then proceeded to systematically slaughter as much as 70 percent of the Tutsi population as well as members of the Hutu minority that defended or sheltered them. The massacre was cut short when the Rwandan Patriotic Front, a Tutsi militia, defeated the Hutu government, ejecting the genocidaires into surrounding countries such as Congo, then called Zaire, where they continued to cause trouble for years.The RPF controls the government to this day despite the Tutsi constituting less than 15 percent of the country's population.

The Muse report claims that French officials provided communication channels for military officials during the genocide and harbored fleeing perpetrators after the RPF took over. They also attempted to prevent the genocidal government from being overthrown by the RPF.

"Historical clarity is crucial and concerns us all," said Rwandan Foreign Affairs Minister Louise Mushikiwabo. "The government of Rwanda commissioned the Muse report to inform our ongoing investigation into the role of French officials before, during, and after the genocide."

"This is also an opportunity for French authorities to collaborate better with Rwanda in the pursuit of truth, justice and accountability regarding the genocide against the Tutsi."

Kigali confirmed to a local outlet that the report has been shared with Paris. The French Foreign Ministry issued a statement to the Associated Press, saying they had "taken note" of the report and were "fully committed to prosecuting those who took part in the genocide."

"We actively supported the creation, in November 1994, of the International Criminal Tribunal for Rwanda, established pursuant to a decision by the UN Security Council. Furthermore, the French legal system has convicted several people and is examining several cases in connection with the Rwandan genocide."

Rwanda renounced their connections to their former backer France after the RPF takeover, cutting off relations and replacing French with English as the official language. Relations were restored in 2009 due to the efforts of then-French President Nicolas Sarkozy, who admitted that his country made "grave errors of judgment" during the genocide in 2010.

However, he stopped short of formally apologizing for the genocide and did not admit French complicity, instead claiming that Paris was operating under "a form of blindness to not have seen the genocidal dimensions."

In 2016, Rwanda released a list of 22 French military officers they named as collaborators in the genocide — including Gen. Jacques Lanxade, then the armed forces chief of staff.