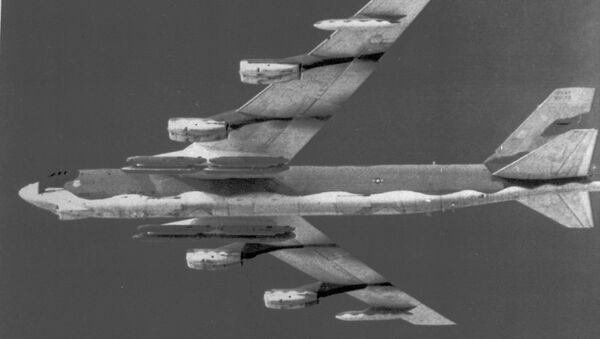 © AP Photo / File
Subscribe
Yale Law School students have requested a US court to permit a class-action lawsuit on behalf of US Air Force veterans who responded to the catastrophic 1966 hydrogen bomb accident in the Mediterranean Sea, but who have been denied disability benefits.

The 1966 accident occurred when a USAF B-52 carrying four hydrogen bombs collided with a USAF KC-135 tanker aircraft during a mid-flight refueling exercise. The refueling nozzle hit the fuselage and caused a major explosion seen by another B-52 pilot a mile away. All four airmen on the FC-135 were killed along with three of the four airmen on board the B-52.

The planes were flying a Cold War airborne alert mission dubbed Operation Chrome. The B-52s, which took off from Seymour Johnson Air Force base in North Carolina, required two mid-flight refuelings over Spain to complete their mission. The accident, which occurred near southern Spain, caused the B-52 to lose its hold on the four Mk-28 hydrogen bombs it was carrying, sending them plummeting down to Earth. Three landed in the fishing village of Palomares, while a third landed in the ocean and was ultimately recovered following a two-and-a-half month search.

"This class action seeks to compel the VA to acknowledge that veterans at Palomares participated in a radiation risk activity that would make any radiogenic conditions they developed presumptively service connected," said Derek Mraz, one of the Yale Law School students working on the case.

About 1,600 service members were marshalled to Spain to recover the Mk-28s and contain the radiation released after the weapons' plutonium detonators exploded, though the nuclear payloads themselves did not go off.

The US Department of Veterans Affairs has hitherto denied these veterans disability benefits, even though many of them developed cancer, blood disorders, and heart and lung conditions, according to Military.com.

The motion to allow a class action suit, filed by Yale students on Monday, lists veteran Victor Skaar as the plaintiff and VA Secretary David Shuklin as the defendant.

"It is absolutely ridiculous to see how we have been treated. We're all hurt. We were ignored, absolutely ignored," Skaar told the Associated Press.