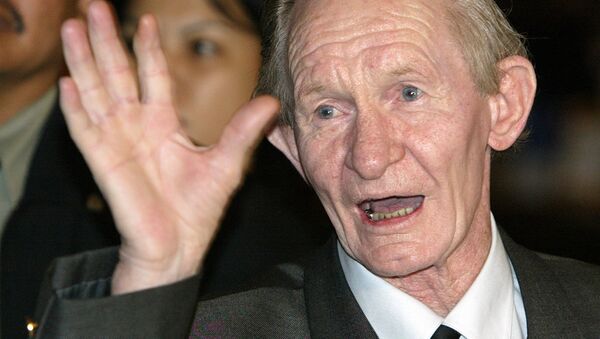 Charles Jenkins, a former US Army sergeant, became a Cold War enigma after his defection to North Korea in 1965, where he appeared in propaganda movies about “evil US spies" and taught English.

Charles Jenkins died on Monday on Sado Island, Japan, where he was living with his wife Hitomi Soga. He collapsed outside his home and later died in hospital due to an unknown cause, The Japan Times reported.

Jenkins was one of a handful of US military personnel to defect across the Demilitarized Zone separating the two Korean states, Jenkins was held in North Korea for nearly four decades teaching English at the Pyongyang University of Foreign Studies and, in 1982, appeared as an evil American in the North Korean propaganda film "Unsung Heroes," The Telegraph wrote.

Charles Jenkins hoped that once in North Korea, he could seek asylum with the Soviet Embassy, and eventually return to the United States in a prisoner swap.

K-Pop Therapy? NK Soldier, Defector Enjoying South Korean Music and US TV Series
While in North Korea, he met Hitomi Soga, a Japanese woman who had been abducted by North Korean agents in 1978 as part of an effort to teach the Japanese language and culture to intelligence agents.

The two tied the knot shortly after they first met in 1980.

In 2004, Charles Jenkins was allowed to leave North Korea and rejoin Soga, who was freed in 2002 and returned to Japan.

In Japan, he reported for duty at the local US military headquarters.

After being court-martialed, serving a 30-day sentence for desertion, he was  given a dishonorable discharge.

Jenkins, Hitomi Soga and their two North Korean-born daughters then moved to Soga’s rural hometown in Niigata Prefecture where he worked in a local gift shop and wrote a book about his experiences in North Korea.