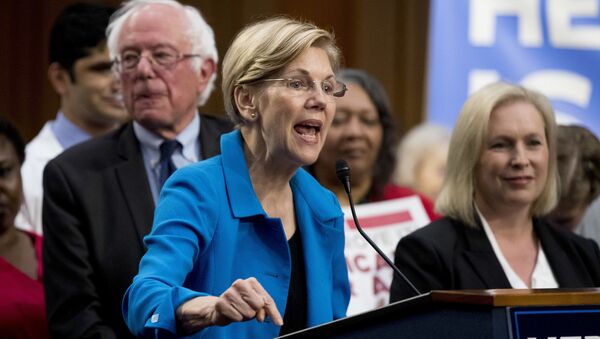 © AP Photo / AP Photo/Andrew Harnik
Subscribe
On Tuesday, US President Donald Trump launched a Twitter war when he called Senator Kristen Gillibrand “used” and a “lightweight,” only to face an immediate counterattack by Senator Elizabeth Warren, who declared that the president was “slut-shaming” his female colleague.

Trump on Tuesday attacked Gillibrand on Twitter, calling her a "lightweight" who "would do anything" for campaign contributions.

Trump Should Resign Over Accusations of Sexual Misconduct - US Senator

Trump lashed out after the New York Democrat urged him to resign over the multiple sexual harassment and assault allegations against him by three women: Jessica Leeds, Samantha Holvey and Rachel Crooks, who spoke out publicly against the president again this week.

"President Trump should resign. But, of course, he won't hold himself accountable. Therefore, Congress should investigate the multiple sexual harassment and assault allegations against him," Gillibrand tweeted Monday.

However, on Tuesday, Trump pushed back, arguing that the allegations are "false accusations and fabricated stories of women who I don't know and/or have never met."

In a Tuesday tweet, Trump wrote, "Lightweight Senator Kirsten Gillibrand, a total flunky for Chuck Schumer and someone who would come to my office ‘begging' for campaign contributions not so long ago (and would do anything for them), is now in the ring fighting against Trump. Very disloyal to Bill & Crooked-USED!"

Within an hour of Trump's tweet, Gillibrand tweeted a response: "You cannot silence me or the millions of women who have gotten off the sidelines to speak out about the unfitness and shame you have brought to the Oval Office."

​​​Gillibrand was one of the 56 female Democratic lawmakers who called on the US House of Representatives' Oversight Committee on Monday to investigation the sexual misconduct allegations against Trump.

On Tuesday, Sen. Warren, a Massachusetts Democrat, accused Trump of slut-shaming Gillibrand in his tweet.

Warren rushed to Gillibrand's defense, accusing the president of attempting to "slut-shame" the senator.

"Are you really trying to bully, intimidate and slut-shame @SenGillibrand? Do you know who you're picking a fight with? Good luck with that, @realDonaldTrump. Nevertheless, #shepersisted," Warren wrote.

​The Democratic Women's Working Group sent a letter signed by 56 lawmakers to committee chair Rep. Trey Gowdy (R-SC) and ranking member Rep. Elijah Cummings (D-MD) on Monday, stating, "At least 17 women have publicly accused the President of sexual misconduct. We cannot ignore the multitude of women who have come forward with the accusations."

On Monday, White House spokesperson Sarah Huckabee Sanders defended Trump and vowed to deliver a list of eyewitnesses whose accounts of his interactions with the women would exonerate the president. She has yet to provide that list.

The women who came forward Monday on NBC's Today show with Megyn Kelly previously accused Trump of unwanted kissing and groping during the 2016 presidential election.

"It was heartbreaking last year," Holvey said on the show. "We're private citizens and for us to put ourselves out there to try and show America who this man is and how he views women, and for them to say, ‘Eh, we don't care,' it hurt."

000000
Popular comments
I am confused. I was under the impression that in that great democracy where the rule of law reigns supreme that a person is considered innocent until proven guilty in a court of law before a jury of his or her peers, etc, etc. The Pentagon and the Western Alliance have slaughtered millions of people between Afghanistan, Iraq, Libya, Syria, Pakistan, and all those other places where the Gospel of Democracy By The Gun is being preached. And these paragons of virtue have not said a word in memory of all those men, women, and children that they have sent to that great democracy in the sky. Three women, three accusations. I am certain that during the past 24 hours, the Pentagon has issued three other women out there, somewhere, their Collateral Damage tickets to democracy heaven. And, not a word in their memory from those wonderful human rights and democracy campaigners in Washington. The US has indeed descended into a permanent, malodorous bog of maliciously arrogant ignorance. No salvation.
African Farmer
13 December 2017, 00:49 GMT
000000
ah yes, the mature acts of politicians.
michael
13 December 2017, 00:55 GMT
000000
Newsfeed
0
New firstOld first
loader
LIVE
Заголовок открываемого материала
Access to the chat has been blocked for violating the rules . You will be able to participate again through:∞. If you do not agree with the blocking, please use the feedback form
The discussion is closed. You can participate in the discussion within 24 hours after the publication of the article.
To participate in the discussion
log in or register
loader
Chats
Заголовок открываемого материала
Worldwide
InternationalEnglishEnglishMundoEspañolSpanish
Europe
DeutschlandDeutschGermanFranceFrançaisFrenchΕλλάδαΕλληνικάGreekItaliaItalianoItalianČeská republikaČeštinaCzechPolskaPolskiPolishСрбиjаСрпскиSerbianLatvijaLatviešuLatvianLietuvaLietuviųLithuanianMoldovaMoldoveneascăMoldavianБеларусьБеларускiBelarusian
Transcaucasia
ԱրմենիաՀայերենArmenianАҧсныАҧсышәалаAbkhazХуссар ИрыстонИронауОssetianსაქართველოქართულიGeorgianAzərbaycanАzərbaycancaAzerbaijani
Middle East
Sputnik عربيArabicArabicTürkiyeTürkçeTurkishSputnik ایرانPersianPersianSputnik افغانستانDariDari
Central Asia
ҚазақстанҚазақ тіліKazakhКыргызстанКыргызчаKyrgyzOʻzbekistonЎзбекчаUzbekТоҷикистонТоҷикӣTajik
East & Southeast Asia
Việt NamTiếng ViệtVietnamese日本日本語Japanese中国中文Chinese
South America
BrasilPortuguêsPortuguese
NewsfeedBreaking
YesterdayNeither Russia Nor US Satisfied With Current State of Relations - Russian Deputy PM
YesterdayNASA Adviser Quits After Agency Keeps Telescope Named After Official Who Backed Anti-LGBTQ Campaigns
YesterdayUK Police Declare Stabbing Death of Sir David Amess a 'Terrorist Incident'
YesterdayReports Show ‘Significant Progress’ in California Oil Spill Cleanup Work - Unified Command
YesterdayUS Capitol Police Officer Indicted for Aiding Self-Identified Rioter, Obstructing January 6 Probe
YesterdayBelgium to Create Artificial Island for Wind Energy Production - Energy Minister
YesterdayExclusion of Myanmar From ASEAN Summit 'Perfectly Appropriate' Step – US State Dept.
YesterdayBig Businesses Side With Biden Over Abbott on Vaccine Mandates
YesterdayEU Parliament's Chair of Afghan Affairs Calls for Urgent Humanitarian Action
YesterdayUS Military: Claim That American Destroyer Threatened to Violate Russia's Maritime Border 'False'
YesterdayBritish Media Angered by Netflix's Low Corporation Tax Payments
YesterdayBelarus Designates Telegram Channel of Opposition Leader Tikhanovskaya as 'Extremist'
YesterdayIMF Warns Pandemic’s ‘Continued Grip’ Could Widen Gap in Rich, Poor Nations’ Recovery
YesterdayPompeo: ‘America Will Be Diminished’ Under Biden’s ‘Risky’ Foreign Policy
YesterdayDental Discoveries: Study of Ancient Teeth Debunks Belief First Americans Came From Japan
Yesterday'Not Into Golden Showers': Trump Shoots Down 'Pee Tape' Allegations at GOP Retreat, Says Media
YesterdayTurkish Military Convoy Targeted in IED Attack Outside Idlib, Injuries Reported
YesterdayPorn Actresses Sued Over 'Highly Salient Scandal' Sparked by Alleged Bestiality Tweets, Media Says
YesterdayChina Engaging in Major Construction at Airbases Near Taiwan, Satellite Snaps Appear to Show
YesterdaySwitzerland Reports 150 Deaths After Vaccination Against COVID-19