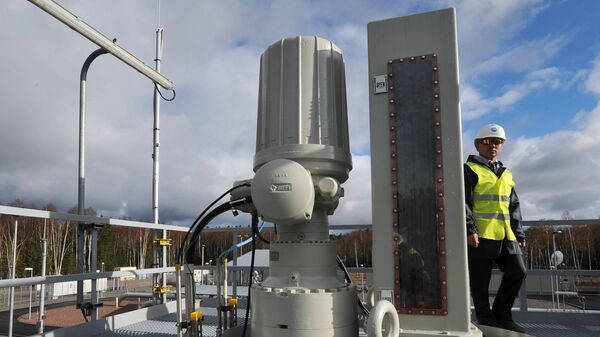 The United States has been increasing its liquefied natural gas deliveries to the European countries, becoming the six largest LNG supplier to the 28-nation European Union in the first quarter of 2017.

WASHINGTON (Sputnik) — Russian gas "should continue to be part of the European energy market," US Deputy Assistant Secretary in the Department of State's Bureau of Energy Resources John McCarrick said during a Senate hearing on Tuesday.

"The United States does not seek to eliminate Russian gas from the market," McCarrick said, stressing, however, that Washington’s priority is to help European countries minimize dependence on a single supplier.

McCarrick went on to say that the United States is opposed to the Nord Stream 2 and the Turkish Stream pipeline projects implemented by Russian energy giant Gazprom jointly with its partners from Europe.

He claimed, "Russia’s aim is political in nature, as they want to develop these projects to gain the technical capacity to make good on its threat to eliminate Ukraine as a gas transit state," he claimed, adding that this not only would deprive Ukraine of over $2 billion in annual transit revenues, but "of a vital, physical and symbolic link to the West."

"Construction of Nord Stream 2 would concentrate 75 to 80 percent of Russian gas imports to the European Union through a single route, thereby creating a potential choke point that would significantly increase Europe’s vulnerability to supply disruption, whether intentional or accidental," he stated, adding that the US welcomes the "skepticism and the vocal opposition within Europe to these unwise projects," which has mostly been voiced by eastern European members.

The statement comes in the wake of US President Donald Trump's signing a law that envisions the expansion of a number of sectoral sanctions against the Russian economy that specifies that Washington would continue to oppose the Nord Stream 2 project aimed at delivering Russian natural gas to Europe. The new sanctions have been harshly criticized by Moscow and the EU, with the German foreign minister calling the restrictions illegal and aiming to take Russia’s place on the European energy market.

Nord Stream 2 is a joint venture of Russia’s Gazprom with France's Engie, Austria’s OMV AG, Royal Dutch Shell and Germany's Uniper and Wintershall. The project envisages the construction of two gas pipelines from the Russian coast, through the Baltic Sea and on to a hub in Germany. The pipelines are expected have a combined annual gas capacity of 55 billion cubic meters.

The United States has been increasing its liquefied natural gas deliveries to the European countries, becoming the six largest LNG supplier to the 28-nation European Union in the first quarter of 2017. According to the International Energy Agency, Washington will become one of the leading LNG exporters over the next five years.

"We are revising the rules governing the export of liquefied natural gas and US-produced crude oil, which will unlock the wealth of American energy to the strategic benefit of allies and provide a boon to the US economy," Mitchell said during a Senate hearing.