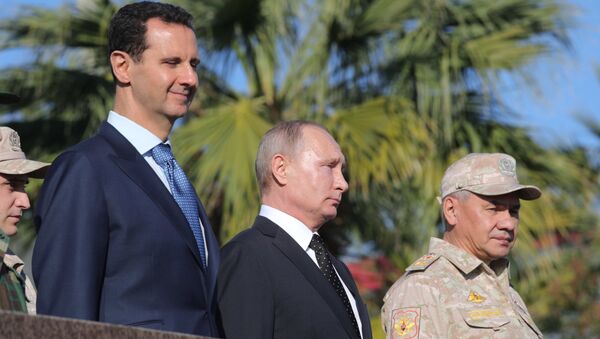 Russian President Vladimir Putin paid a surprise visit to Syria on Monday, where he announced that his nation would begin to withdraw “a significant part” of their military forces deployed in the Middle Eastern nation as its long civil war draws to a close.

Putin's announcement was discussed on Radio Sputnik's Loud & Clear by hosts Brian Becker and John Kiriakou and guests Mark Sleboda and Rick Sterling. Sleboda is a Russia-based international relations and security analyst and frequent critic of US policy, while Sterling is a journalist and member of the Syria Solidarity Movement, an organization that supports the Syrian government.

​"It was a surprise," said Sleboda. "Putin was obviously headed on the way to Cairo, and then on the way back to Turkey, but the side trip to Syria and particularly to the Russian airbase in Syria certainly was a surprise. As for this announcement, this ‘mission accomplished' moment… we've heard several previous such ‘Russia is withdrawing their military forces from Syria' claims before."

"I think there were certainly enough caveats and qualifications to Putin's statement that, while recognizing the significant victories that have been achieved, we should take this announcement with a grain of salt. Russia is not leaving Syria, they are not leaving their military bases. There remain significant military hurdles: significant terrorist concentrations, the entirety of Idlib governance is under the control of al Qaeda. I think this was probably primarily an announcement for domestic political consumption, as Putin announces his intent to run again for another six-year term in 2018."

"It's also a reminder to the Americans that at least the majority of the fighting in east Syria against [Daesh] is done," Sleboda added. "They no longer at least hold any urban areas, at least there the military mission is accomplished. The US no longer has any excuse, not that they ever had any legal remit for their operations in east Syria. But Putin was letting them know that it's time for them to pack their bags and go home."

Becker pointed out a CNN headline from early 2016 that was quite similar to the recent one — but Russia did not pull forces out as CNN claimed; they actually intensified their military involvement.

Sterling elaborated on Moscow's movements: "It's an indication of an intent. They don't plan on maintaining a large military force there indefinitely, but they can come back if needed. The fact is that Russia is not very far from Syria, only about 600 miles from Sochi, their air base. It's not very hard for the Russian Air Force to move at least some of their airplanes and pilots and so forth up into southern Russia, and if needed they can still be called into duty in Syria."

Kiriakou asked the guests if they believed it possible that Russia could end up in an quagmire in Syria, similar to what has happened to the US in Iraq and Afghanistan. Sleboda replied that Russia was likely to remain in the Middle East for years to come, but of their own volition.

"Russia is back in a big way in the Middle East. Suddenly everyone in the Middle East [is working with Moscow]: Iraq, which the government there, although showing a lot of the signs of independence, was installed as a result of the US invasion and regime change there. Saudi Arabia has come to the table with Russia to sign oil deals and potential military deals after losing this oil price war."

"Qatar, Turkey, the United Arab Emirates, Kuwait, they're all now looking to Russia because Russia has showed the willpower, resolve, and capability to back up military force with hard diplomacy and achieve results in the Middle East — something that the US and all of their regime change and intervention has not shown anything with anywhere near so positive a result."