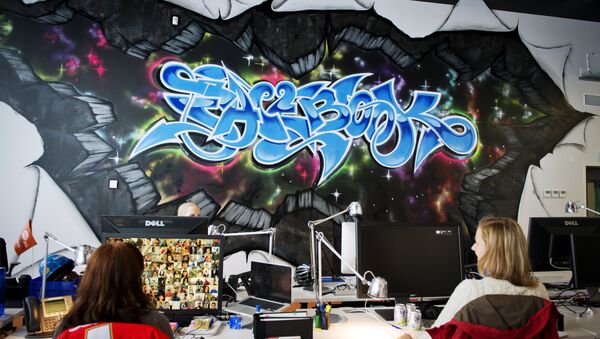 Chamath Palihapitiya, who joined Facebook in 2007 and became its vice president for user growth, said he feels “tremendous guilt” about Facebook’s ability to manipulate people.

“I think we have created tools that are ripping apart the social fabric of how society works,” he told an audience at the Stanford Graduate School of Business.

He then advised people to take a “hard break” from social media.

Australia Set to Investigate Google, Facebook Over Their Impact on News Market
“The short-term, dopamine-driven feedback loops that we have created are destroying how society works. No civil discourse, no cooperation, misinformation, mistruth,” said Palihapitiya in remarks carried by the tech website the Verge.

He added that people are actually being “programmed” by social networks without even knowing it.

His criticism was aimed not only at Facebook, but other social networks as well. The scale and power of these networks, he warned, allows evil agents to influence massive swaths of users, artificially skewing elections and the public’s perception of important issues, stocknews.com wrote.

Palihapitiya’s eye-opening comments came just a day after Facebook’s founding president, Sean Parker, turned Facebook into a multi-billion dollar business with two billion users to date, admitted that he and Mark Zuckerberg had created  a monster by “exploiting a vulnerability in human psychology.”

Social networking companies have recently come under increased scrutiny in Europe and the US with politicians and regulators considering their role in stocking up political divisions across the world through the use of popular platforms that dominate online discourse.

000000
Popular comments
True, I feel like a alien, when i read a book on a train these days.
stevenrobertchurchill
12 December 2017, 11:54 GMT2
000000
Facebook was a deep state CIA creation to consolidate social websites for exactly what this guy is complaining about. I understood Facebook was being developed by the original guys for university. There were many platforms available at the time and these developers were hand picked and bought by the devil in the US for control and manipulation purposes. Society needs to be protect, not from Facebook, but by the insidious part of the government that we never really see but feel the effects of.
Rokenbok
12 December 2017, 12:18 GMT2
000000
Newsfeed
0
New firstOld first
loader
LIVE
Заголовок открываемого материала
Access to the chat has been blocked for violating the rules . You will be able to participate again through:∞. If you do not agree with the blocking, please use the feedback form
The discussion is closed. You can participate in the discussion within 24 hours after the publication of the article.
To participate in the discussion
log in or register
loader
Chats
Заголовок открываемого материала
Worldwide
InternationalEnglishEnglishMundoEspañolSpanish
Europe
DeutschlandDeutschGermanFranceFrançaisFrenchΕλλάδαΕλληνικάGreekItaliaItalianoItalianČeská republikaČeštinaCzechPolskaPolskiPolishСрбиjаСрпскиSerbianLatvijaLatviešuLatvianLietuvaLietuviųLithuanianMoldovaMoldoveneascăMoldavianБеларусьБеларускiBelarusian
Transcaucasia
ԱրմենիաՀայերենArmenianАҧсныАҧсышәалаAbkhazХуссар ИрыстонИронауОssetianსაქართველოქართულიGeorgianAzərbaycanАzərbaycancaAzerbaijani
Middle East
Sputnik عربيArabicArabicTürkiyeTürkçeTurkishSputnik ایرانPersianPersianSputnik افغانستانDariDari
Central Asia
ҚазақстанҚазақ тіліKazakhКыргызстанКыргызчаKyrgyzOʻzbekistonЎзбекчаUzbekТоҷикистонТоҷикӣTajik
East & Southeast Asia
Việt NamTiếng ViệtVietnamese日本日本語Japanese俄罗斯卫星通讯社中文（简体）Chinese (simplified)俄罗斯卫星通讯社中文（繁体）Chinese (traditional)
South America
BrasilPortuguêsPortuguese
NewsfeedBreaking
18:09 GMTPicasso’s Daughter Donates 9 Heirlooms in Tax Arrangement With France
18:01 GMT'F**k Off, Leave Me Be Please': Sex Education’s Asa Butterfield Annoyed With Pic-Taking Fans
17:56 GMT'Booby' Prize: XR's Topless Protester Goes Bust to Raise Funds on OnlyFans
17:51 GMTPorn Case: Businessman Raj Kundra Granted Bail After 2 Months of Arrest
17:47 GMTKosovo Police Reportedly Use Tear Gas Against Serbian Protesters
17:44 GMTLawyer for Trump Organization’s Ex-CFO Has ‘Strong Reason to Believe’ More Indictments Looming
17:36 GMTMystery Death: Noted Hindu Seer Found 'Hanging Inside Monastery' in India
17:23 GMTFans Slam PSG Boss Mauricio Pochettino as Lionel Messi's Reaction to Being Subbed Goes Viral
17:16 GMTWoman Spots 4Ft-Long Crocodile on the Loose in a Yorkshire Garden
17:14 GMTUN Chief Calls for Decisive Action to Avert 'Climate Catastrophe' Ahead of Glasgow Summit
17:08 GMT'Multiple Injuries' Reported in Shooting at Virginia High School
17:05 GMTAlien Tech Could Cause 'Solar Explosion' That Might 'Wipe Out Life on Earth', Blogger Claims
16:22 GMTTwitter Mocks Journo Claiming Biden Victim of ‘Uncontrollable Events’
16:01 GMTUS 'Has No Intention to Extend Nuclear-Powered Sub Support' to Other Countries After Australia
15:45 GMTMystery Deepens Around Gabby Petito's Disappearance as FBI Finds Body Matching Her Description
15:45 GMTConcerns Over 'So Many Open to Pursuing a Career in Pornography' Amid UK Survey Results
15:40 GMTSwiss Foreign Ministry Calls Reports on Cancellation of Parmelin-Macron Meeting Incorrect
15:09 GMTRadical Daesh Women Blamed for Dozens of Killings at Al-Hol Syrian Detention Camp
15:00 GMTPutin Says Perm University Shooting is Huge Disaster for Whole Country
14:56 GMTSign of Normalisation as Syria’s Defence Minister Visits Jordan to Discuss Border Security