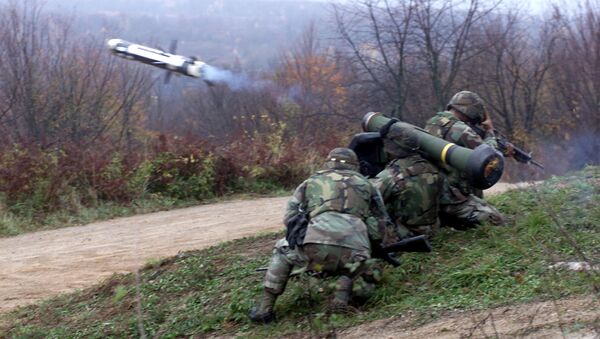 TALLINN (Sputnik) — In total, $33 million worth of ammunition has been delivered to Estonia, including a new batch of modern Block-1 missiles for third-generation US Javelin anti-tank systems. These deliveries were financed from the funds allocated in 2014 by the United States within the framework of European security measures.

"The Block-1 missiles have a more modern engine, software control and increased warhead power compared to their predecessors from the previous generation, guaranteeing a higher flight speed and greater damage," the head of the Weapons and Ammunition Support Group of the Estonian Defense Forces Logistic Center, Maj. Risto Partel, said.

NATO Cyberdrills Kick Off in Estonia - Press Service
In 2014, the Estonian Defense Ministry signed an agreement on the purchase of 80 Javelin anti-tank missile systems from the United States. The agreement also allowed Estonia, if necessary, to buy 40 more such systems.

Javelin is a so-called fire-and-forget system, which allows the operator to go under cover or change positions after launching the missile, increasing the survivability of both the operator and the system as a whole. After being shot, the missile is automatically directed to the chosen target and the shooter cannot track the missile's post-launch flight until the projectile hits its target.

Javelin systems have been used by the United States and several other countries since the mid-1990s.