World on Threshold of New Physics 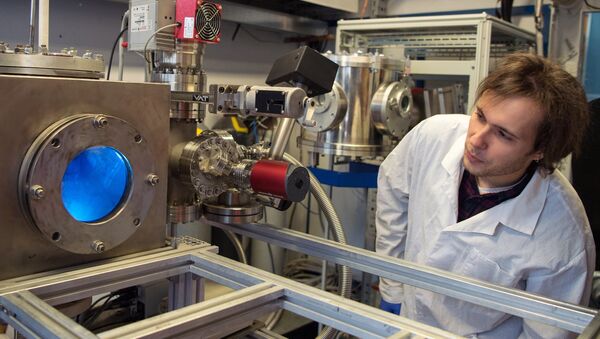 The National Research Nuclear University is one of the most recognized Russian universities, founded in 1942.

"The world is on the threshold of a new physics," said the management of the National Research Nuclear University (MEPhI) during a news conference for the 75th anniversary of the organization held at Rossiya Segodnya. Leading scientists have given examples of how the university has managed to become one of the leading international nuclear universities.

MEPhI deputy director Georgy Tikhomirov noted that modern education is closely tied to research. "We are on the threshold of a new physics," he said, adding that he was referring to new energy sources, space forecast monitoring, "tolerant" nuclear fuel and "digital twin nuclear power plants."

Pushkin Institute Opens Online Express Russian Language Course
He also spoke about how solar activity affects processes in Earth's magnetosphere and atmosphere, according to data from the MEPhI's equipment on earth and satellites. According to Tikhomirov, technology to monitor and forecast changes in the heliosphere, magnetosphere and Earth's atmosphere will be developed with joint data from the PAMELA detector and the URAGAN muon hodoscope (a piece of equipment used to recognize thunderstorm anomalies). In addition, the MEPhI will have a multi-functional scientific complex to study cosmic rays with satellite and surface detectors.

During the live broadcast from the European Organization for Nuclear Research (CERN), the head of the MEPhI ATLAS Group, Anatoly Romanyuk, described the university's large contribution to the ATLAS Experiment. This was a major experiment held at the Large Hadron Collider where the Higgs boson was discovered. This discovery has completed the experimental confirmation of the Standard Model, which unites all knowledge in the physics of elementary particles.

"However, this discovery is just the tip of the iceberg. There are still many questions beyond the model," the scientist noted. For example, the Standard Model does not account for gravitational force or dark matter. "High energy physics is not a particle zoo; we study how particles interact, how the Higgs boson acts, how it interacts with the heaviest quark and so on," he added.

"The MEPhI cooperates closely with Rosatom. Two-thirds of Rosatom's financial interests lie abroad and one-third is in Russia," MEPhI Rector Mikhail Strikhanov said, adding that the university should pursue its educational and scientific activities in accordance with the employer's needs and introduce its education process to other countries.

China Unveils Physics-Defying Engine for Deep Space Exploration
Within 75 years, the MEPhI has become more open not only in international cooperation but also in the subjects it studies and has diversified its research. Today the university is actively taking on challenging tasks, which are not directly connected with traditional areas. Emotional artificial intelligence, smart grid energy networks, biomedicine and even blockchain and the internet of things are among the areas the MEPhI is ready to integrate.

A professor at the MEPhI Department of Cybernetics and research director of the MEPhI Institute of Cyber Intelligence Systems, Alexei Samsonovich, described one of the prospective areas.

"Artificial intelligence — is it a threat or a blessing, singularity or plateau, human or machine — these are dilemmas the Institute of Intellectual Cyber Systems has to solve," he said. Speaking about the development of cognitive technology and intelligence agents, he added that the MEPhI was working on creating a "virtual actor" with elements of social and emotional intelligence.