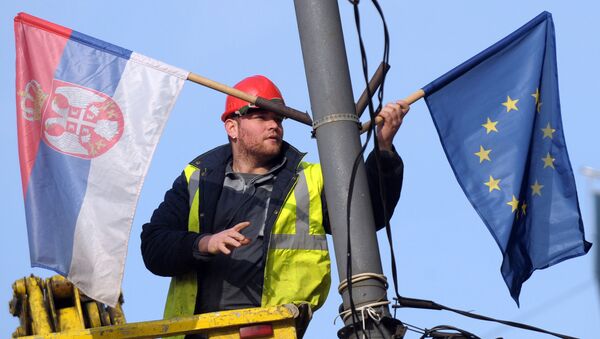 © AFP 2021 / ALEXA STANKOVIC
Subscribe
Officials from Serbia and Montenegro met with EU leaders December 12 to discuss accession. The digestion of the Western Balkans has been an aspiration of the bloc ever since the breakup of Yugoslavia began, but some successor states are of greater interest than others.

Upon taking office in 2014, European Commission President Jean-Claude Juncker adopted a conservative stance on European Union expansion — in no uncertain terms, he stated the bloc needed to "take a break" from enlargement, and would adopt no new members over the course of his five-year term.

Such positioning was a far cry from the President's 2017 State of the Union address, in which he said Brussels must be open to new recruits — in particular, states in the Western Balkans, which once comprised Yugoslavia.

At All Costs: EU Seeking to Absorb Western Balkan States Into Bloc 'Before 2024'

Accordingly, officials from Serbia and Montenegro — seen as frontrunners by bloc leaders — are meeting with EU officials December 11 to discuss their path to member statehood — and Juncker and European Parliament President Antonio Tajani are due to visit the region in 2018.

Broadly in keeping with suggestions made in June by Johannes Hahn, Commissioner for Enlargement Negotiations, that Western Balkan states could be absorbed into the EU before 2024, the Commission envisages the two frontrunners joining by 2025 at the latest.

Ever since the breakup of Yugoslavia began in earnest in June 1991, when Croatia and Slovenia declared independence from the confederation, the EU has had its proverbial eye on the region, although absorption of the fallen country's constituent parts has been a slow process.

Slovenia was first to join in 2004, and it was only in 2005 the six other successor countries were formally recognized as candidates for membership — it took until July 2013 for Croatia to become a fully-fledged EU member state.

Montengro and Serbia's negotiations to join began in 2012 and 2014 respectively. Bosnia and Herzegovina has applied, and Macedonia is a considered a formal candidate — while negotiations have not started, they've been pending since 2005. Kosovo has not submitted an official application, but is considered a potential candidate in any event. In each country's case, there are several factors that have served as barriers to accession.

Given the hitherto lethargic pace of EU enlargement in the region, what accounts for this sudden burst of activity?

In a September speech by Emmanuel Macron the French President angsted over the prospect of these countries "[turning] their backs on Europe" and pivoting toward Russia and/or Turkey unless membership negotiations move forward quickly.

Serbia's close political relationship with Russia has long been a sticking point for Brussels — Serb leaders have made clear they would never implement or accept anti-Russian sanctions, or change their policy of military neutrality and join an alliance such as NATO, or the planned future EU Army.

Moreover, support for EU membership in Serbia is low and ever-dwindling — the 2017 Balkan Barometer survey indicates a mere 26 percent of the population view the prospect as a positive one, a figure that has almost halved in four years. Such are official concerns about this escalating antipathy, the EU announced in September it had earmarked almost US$2 million for pro-bloc propaganda efforts in the country, in an attempt to boost public backing.

The EU's desperate dash to assimilate Serbia runs the risk of alienating the country's neighbors, including Kosovo. In September, leader Hashim Thaci accused Commission (EC) of "dealing a blow" to and turning its back on the country, along with Albania, Bosnia and Herzegovina, and Macedonia, by not offering them a clear accession strategy.

The breakaway territory would likely be last in the queue to join the EU in any event — the international community remains split over its 2008 declaration of independence, with many countries refusing to recognize it as a state in its own right, including five EU members — Spain, Greece, Romania, Slovakia and Cyprus.

​EU leaders are also concerned about hostilities directed at Kosovo's Serbian minority population — around 50,000, primarily clustered in the North. While Kosovo and Serbia alike have a formal policy of not impeding the other's EU membership bids, and Kosovo's government has granted a degree of autonomy to Serb-majority areas in the country, many frontline politicians are unhappy about the concession, and actively pledge to reverse it.

READ MORE: Albanians Seek to 'Demonstrate That Serbs Have No Place in Kosovo'

Moreover, a 2013 EU investigation found the government's efforts at tackling human trafficking and criminal gangs responsible for the smuggling of illicit drugs and weapons was insufficient.

000000
Popular comments
They would be idiots to join the EU. Such short memories.
anne00marie
11 December 2017, 20:21 GMT1
000000
Who, in this day and age, and in all sanity, would still be interested in joining this dictatorial, decadent and collapsing club of bureaucrats? Serbians, please, don't do it! Don't allow your Govt doing it! Stay away from this nightmare, and remain free!