Putin has discussed bilateral ties between Russia and Egypt during the talks with his counterpart Sisi, as well as the situation in the Middle East, including the Israeli-Palestinian settlement in the wake of the controversial decision made by US President Donald Trump last week.

Russia and Egypt "advocate for a swift resumption of the direct Palestinian-Israeli dialogue on all controversial issues, including the status of Jerusalem. Long-term and fair agreements respecting the interests of both sides are needed," President Vladimir Putin has stated following the talks with his Egyptian counterpart Abdel Fattah Sisi, adding that such agreements must be in accordance with the decisions of the international community that had been earlier adopted.

"We consider any steps that anticipate the outcome of the dialogue between the Palestinians and the Israelis to be counterproductive. We believe that such steps are destabilizing, do not help resolve the situation, but, on the contrary, provoke conflict," the Russian president said.

Commenting on US President Donald Trump's controversial decision on the recognition of Jerusalem as the capital of the Israeli state, that has been widely condemned by Arab states, as well as many countries voicing support for a two-state solution to the Israeli-Palestinian conflict, the Russian Foreign Ministry has previously stated that Moscow was concerned about the move and called on all sides to show restraint.

Israel declared Jerusalem its "single and indivisible" capital, including its eastern districts and historic center, repulsed half a century ago from Jordan and later annexed. The world community does not recognize the annexation and considers the status of the city to be one of the core problems of the Middle East conflict, which should be resolved on the basis of an agreement with the Palestinians, which claim the eastern part of Jerusalem. In this regard, all foreign embassies are located in Tel Aviv.

Situation in Syria and Fight Against Terrorism

The two leaders have also discussed the situation in Syria, with President Vladimir Putin saying that Russia and Egypt have agreed to strengthen coordination of efforts to promote the peace process in the country.

"We are grateful to our Egyptian partners for supporting the Russian initiative to convene the Syrian National Dialogue Congress. We are planning to involve in its work various groups of opposition, including representatives of the so-called Moscow and Cairo platforms," Putin added.

In his turn, Sisi said that he had discussed political crises in Libya and Syria with Putin, noting that Egypt's position coincided with Russia's in terms of the need for expansion of de-escalation zones in the Arab Republic to create necessary conditions for further peace talks between all religious and ethnic groups. 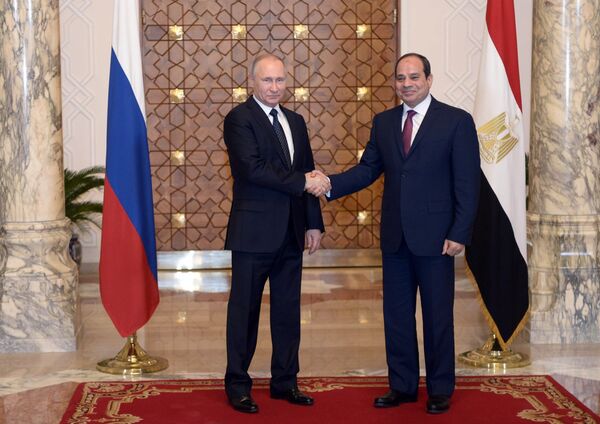 According to the Egyptian president, Moscow and Cairo have agreed to exchange reconnaissance information to fight against terrorism.

At the same time, Putin said, "We agreed to expand ties in the military and defense industry areas. First of all, in order to strengthen the anti-terrorist potential of the Egyptian Armed Forces."

Putin and Sisi met shortly after the Russian president announced the withdrawal of troops from Syria, emphasizing that the country's sovereignty and independence has been preserved thanks to the successful anti-terrorist operation, adding that conditions for the political settlement in the country under the auspices of the UN have been created and the refugees, that had to flee their homes, may return.

Speaking about the long-awaited resumption of direct flights with Egypt that have been suspended after the deadliest plane crash in history of the Russian aviation that took place in the Sinai in 2015, Putin said, "In this time, the Egyptian side did great work on increasing the level of security in airports. The Russian security service reported to me that we are overall ready for resumption of direct flights between Moscow and Cairo."

Russia will seek to sign an agreement with Egypt on resumption of direct flights very soon, the president added.

A Kogalymavia Airbus A321 passenger airliner, with 217 passengers and seven crew members on board, crashed in the Sinai Peninsula in Egypt on October 31, 2015, leaving no survivors. Russia designated the incident as a terrorist act.

Following the crash, Russia suggested that Egypt should increase security measures, while Cairo made security upgrades in its airports after the tragedy in an effort to comply with Russian demands and resume air traffic.

Commenting on bilateral trade, Putin said that investment in the Russian industrial zone near Egypt's northeastern city of Port Said could total $7 billion. "We believe that it will become the biggest regional center for the manufacturing and delivery of Russian goods to the markets of the Middle Eastern countries and Africa. Leading Russian companies are already expressing interest in this project."

The trade turnover between Russia and Egypt has grown by 1.5 times during the first nine months of 2017 and exceeded $4 billion, Putin said, adding that "Russia has always recognized the particular importance of the development of friendly and mutually beneficial relations with Egypt, our long-standing and reliable partner in the Middle East and North Africa."

During the meeting, Russia and Egypt signed in Cairo on Monday the decrees on the implementation of the contracts on the construction of the Dabaa nuclear power plant (NPP) with Russia's participation. The two countries signed an intergovernmental agreement on cooperation in the construction and the operation of the first Egyptian nuclear power plant in the Dabaa area on ​​the Mediterranean Sea coast using Russian technology in 2015.