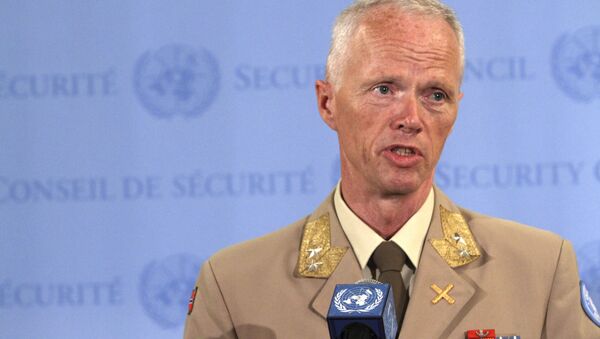 Robert Mood, one of Norway's most experienced and decorated officers with almost 40 years of experience, has taken a merciless stance against Norwegian politicians in his new book. By his own admission, Mood is more intimidated by the rhetoric of local politicians than that of Vladimir Putin's Russia.

Norwegian defense veteran Robert Mood, known for having occupied positions of power within the Norwegian Armed Forces, NATO and the United Nations, has unleashed scathing criticism against his country's authorities, accusing them of "navel-gazing" and "short-sightedness."

"[Prime Minister] Erna Solberg inviting politicians with confrontational rhetoric and intimidation to the King's board scares me more than Putin's Russia," the former army commander said, hinting at Oslo's dubious partnerships in the Middle East, as quoted by the Aftenposten daily.

In his new book, "Responsibility: leadership is not a popularity contest," Mood, last year's winner of the Free Word literature prize, argued that the Norwegian leadership doesn't deserve the confidence it enjoys from Norwegian soldiers.

​"So much political intriguing and so little substance. Such great opportunities and so little ability and willingness to seize them," Mood said.

According to Mood, Norway's foreign policy needs a greater emphasis on values. The values held in high esteem at home get subdued on the internbational arena, for the simple reason of gaining market access tor Norwegian companies selling arms, among other things, Mood argued. The former army boss also cited Prime Minister Erna Solberg's visit to China and Fisheries Minister Per Sandberg's visit to Iran to boost fish exports, calling for greater courage and an eagerness to solve today's challenges, even the cost of a loss in voters' interest.

Norway's Dubious Russia Report Incites 'Friend or Foe' Debate
According to Mood, Stoltenberg should have resigned immediately after the Anders Breivik attack that claimed 77 lives on July 22, 2011, as "being in charge of all that went wrong that day." By remaining in power, Stoltenberg sent an unfortunate signal to future leaders in terms of responsibility and decision-making. Mood also ventured that "sympathetic, nice and likeable people" like Stoltenberg were not necessarily more effective than politicians he described as "rude, abrupt and arrogant."

"On the contrary, leaders who always seek compromise and shy away from the less popular decisions may be the weak leaders. On the other hand, they fit well in NATO, where consensus, compromise and less clear leadership is exactly what is demanded," Mood argued.

​Neither Erna Solberg nor Jens Stoltenberg answered Mood's harangues, while Integration Minister Sylvi Listhaug agreed with the former army official that leadership is not a popularity contest.

Fifty-nine-year-old Robert Mood is the former inspector general of the Norwegian Army and the chief of the UN Truce Supervision Organization (UNTSO). Recently Mood was appointed the president of Red Cross Norway.