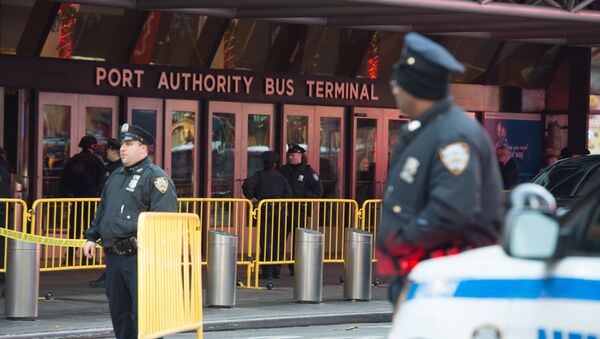 "This attack underscores the need for Congress to work with the president on immigration reforms that enhance our national security and public safety," White House spokesperson Sarah Sanders said during a press briefing. "We must protect our borders, we must insure that individuals entering our country are not coming to do harm to our people."

Explosion Rocks Central Manhattan: Four Injured, Suspect in Custody
Sanders said that President Donald Trump’s policy has called for an end to chain migration in the United States that would have prevented Monday’s attack, adding that terrorist attacks are occurring as the US-led coalition continues to make gains against Daesh terror group.

US Department of Homeland Security (DHS) spokesman Tyler Houlton said in a statement that Akayed Ullah, 27, who has been identified as the sole suspect responsible for the Monday morning's explosion, is a lawful US resident, who came from Bangladesh.

"[DHS] can confirm that the suspect was admitted to the United States after presenting a passport displaying an F43 family immigrant visa in 2011," Houlton said on Twitter. "The suspect is a Lawful Permanent Resident from Bangladesh who benefited from extended family chain migration."

Authorities have taken Ullah into custody and are treating the incident as an attempted terrorist attack.

Media earlier reported that Ullah lived in New York’s borough of Brooklyn and used to work as a taxi driver. The reports also said the explosion was a Daesh-inspired attack.

000000
Popular comments
Foreign domestic terrorism is the least of concern as domestic anger towards a ever increasing dysfunctional American government continue to grow.