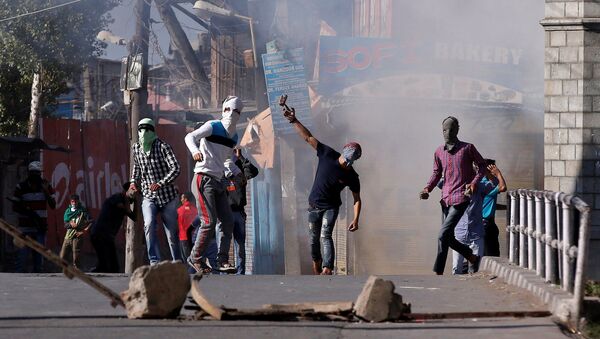 New Delhi (Sputnik) — French journalist Paul Comiti Edward was arrested late Sunday by the Indian police for filming a documentary on pellet gun victims in Kashmir without obtaining prior permission from the authorities. Comiti is the winner of the 2009 Bayeux-Calvados Awards for War Correspondents. He won the award for reporting on French soldiers ambushed in Afghanistan.

India Looks for Alternative to Pellet Gun to Quell Protests in Kashmir
The Jammu and Kashmir police have booked Comiti for violating the Passport Act, and he is presently lodged in the Kothibagh police station. Police claimed that Edward had arrived in Kashmir on a business visa valid till December 2018 and had met some separatist leaders and pellet gun victims in the last 10 days. Travelers on a business visa are not allowed to film political or security-related issues in India. Some officials of the French Embassy in New Delhi reportedly visited Comiti at the police station after his arrest humiliated the embassy.

Some 4,000 people were wounded when security forces in Kashmir resorted to pellet gun firing to suppress mob violence triggered by the death of Burhan Wani, a local militant. A section of the local population had taken to the streets pelting stones at the security forces, claiming Wani had been a "freedom fighter" fighting on behalf of Kashmiris. Some of the wounded have claimed to have lost their eyesight after being hit by pellets.