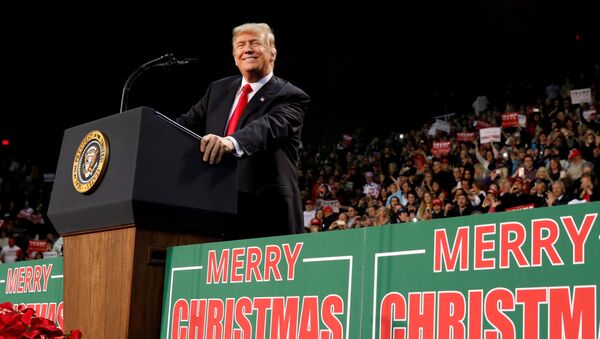 US President Donald Trump, well-known for his “fake news” mantra, has once again blasted media organizations and their journalists for reporting lies.

Trump is famous for being rather eloquent in everything concerning media slamming, and this time was no exception: he ended up calling the “Fake News Media” and journalists publishing purposely false stories "a stain on America," that had spin out of control.

Very little discussion of all the purposely false and defamatory stories put out this week by the Fake News Media. They are out of control — correct reporting means nothing to them. Major lies written, then forced to be withdrawn after they are exposed…a stain on America!

This weekend Trump’s criticism targeted Dave Weigel, a journalist from The Washington Post, who had erroneously downsized the audience at Trump’s rally in Florida. Trump had previously boasted that arena, where he urged people to vote for Roy Moore, accused of sexual misconduct, in the Senate election, was “packed to the rafters”:

GREAT EVENING last night in Pensacola, Florida. Arena was packed to the rafters, the crowd was loud, loving and really smart. They definitely get what’s going on. Thank you Pensacola!

​In the meantime, Weigel apologized for tweeting a photo of a mostly empty arena before the rally on his personal account, and deleted the picture, minutes after Trump’s “Twitter storm.”

.@DaveWeigel @WashingtonPost put out a phony photo of an empty arena hours before I arrived @ the venue, w/ thousands of people outside, on their way in. Real photos now shown as I spoke. Packed house, many people unable to get in. Demand apology & retraction from FAKE NEWS WaPo! pic.twitter.com/XAblFGh1ob

Sure thing: I apologize. I deleted the photo after @dmartosko told me I'd gotten it wrong. Was confused by the image of you walking in the bottom right corner. https://t.co/fQY7GMNSaD

​While Weigel explained that “everything he said on Twitter was a joke,” Trump couldn’t be stopped anymore; he went as far as to demand that he should be fired:

.@daveweigel of the Washington Post just admitted that his picture was a FAKE (fraud?) showing an almost empty arena last night for my speech in Pensacola when, in fact, he knew the arena was packed (as shown also on T.V.). FAKE NEWS, he should be fired.

How many seconds did you spend on verifying your story before you post it?

Everyone is in a hurry to be first how about being correct? First means crap if you cheat or lie to get there

If by bad tweet, you mean false, that is one thing and you corrected it. Nothing, however, can correct the snarky, mean spirited motivation as evidenced by the caption you included. Why are you guys so unprofessional?

It is a known fact that Trump rallies are always packed to the rafters. So I don’t understand why somebody would believe that suddenly Trumpers will stop showing up. #MAGA

Others didn’t miss a chance to lash out at Trump…

He's not the only one who should be fired!

So when you lie you should be fired as wel correct, or is that not how this works?

You tweeted unverified videos, supported a pedophile for senate, admitted to groping and many people in PR still don't have power.

​Trump had previously tweeted that CNN was “caught red-handed” with fake news on Russian meddling. According to the report, the President’s son, Donald Trump Jr., received an email, giving him access to some hacked documents of the Democratic Party from WikiLeaks, on September 4, 2016, before they had been made public. However, the date was wrong: the email was sent on September 14, after the material was officially published.

​​Blasting CNN on his Twitter feed, Trump recalled Brian Ross of ABC News for another incorrect story, reporting that Trump, while still a candidate for president, had directed Michael Flynn, the former national security adviser, to establish contact with the Kremlin.

Fake News CNN made a vicious and purposeful mistake yesterday. They were caught red handed, just like lonely Brian Ross at ABC News (who should be immediately fired for his “mistake”). Watch to see if @CNN fires those responsible, or was it just gross incompetence?

Ever since Trump assumed office, he’s been attacking media organizations and their journalists for being “truly dishonest”, “fake”, “bad”, and “crooked”, which, according to the UN High Commissioner for Human Rights Zeid Ra’ad al Hussein, may result in the incitement of violence toward media.