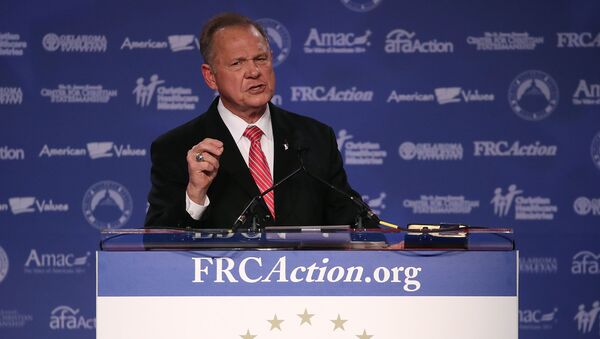 Dean Young, Roy Moore's chief strategist, has urged Alabama residents on ABC's "This Week" to vote for the Republican Senate candidate if they want the US President Donald Trump's  program to be implemented in the state.

"This is Donald Trump on trial in Alabama," Young stated, adding that the special election was "ground zero" for Trump.

Speaking about the multiple allegations of sexual misconduct Roy Moore has been facing, including assault and sexual encounters with underage teenagers, the strategist claimed that the women aren't credible.

Trump has urged Alabama voters to "get out and vote" for Moore, mocking the Democratic Party rival Doug Jones during a Pensacola rally several miles from the Alabama border and inside one of Alabama's largest media markets.

Addressing the rally with his standard "Make America Great Again" speech, the president called Moore's Democratic rival too liberal for Alabama and warned that Republicans can't afford to lose a vote in the Senate, where they hold a 52-48 majority.

Trump has cast doubts on those who have accused Morre of sexual abuse and described Democrat Jones as a "liberal puppet" of party leaders Chuck Schumer and Nancy Pelosi.

Soon after the allegations of rape and sexual abuse against Ray Moore had been revealed, many GOP members, including Paul Ryan, urged Moore to leave the race, withdrawing their endorsements of the candidate.

Commenting on the issue, Senate Majority Leader Mitch McConnell stated that Moore would face an ethics probe, also calling him to step aside.

Multiple Republicans revoked their endorsements of Moore after several women alleged that he made sexual advances toward them when they were teenagers. Moore denied the claim that in 1979 he had sex with a 14-year-old girl, but admitted in an interview last month that he may have dated women in their late teens.