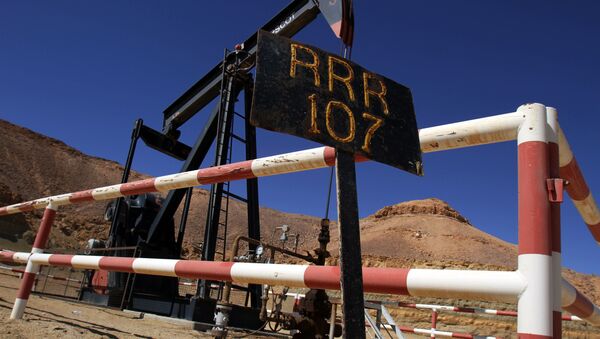 © AFP 2021 / Abdullah Doma
Subscribe
Libya is seeking ways to boost its oil output in defiance of a recently reached agreement with OPEC and Russia to cut production, citing its fiscal and monetary struggle.

The head of Libya’s UN-recognized government held a meeting with leaders of the National Oil Corporation (NOC), as well the governor of the nation’s central bank Saturday, discussing the allocation of additional funds to increase oil output.

Libya has been mired in political instability and suffered the consequences of fragile public finances for years entailing the overthrow of Gaddafi. However, as international oil prices increased, warring factions within the country – including Islamic extremists associated with Daesh – have sought ways to ship more oil overseas in order to boost their political influence.

The central government, backed by the UN, is now weighing an increase in state-controlled oil output for the same reason, as increased budget revenues could enhance political stability in the country. However, the NOC has been significantly underfunded in the past two years, and this lack of investment in the oil industry has limited government-controlled oil production.

Besides, Libya joined the OPEC oil cuts recently, not least due to the understanding that the nation’s output capacity is restrained anyway due to these systemic factors. Current discussions are therefore controversial at least, as they contradict the spirit of the OPEC-Russian accords aimed at supporting oil prices, and Libya appears to be seeking to capitalize on the results of the agreement.

Libya agreed its oil production would not exceed 1 mln bpd, and Libya said it would bring its output in line with the target next year. However, increased governmental investment in the oil industry could allow the nation to produce more oil in the near future.

“The OPEC quota doesn’t matter. Moving beyond 1 million barrels a day in 2018 is going to be very difficult anyway,” Riccardo Fabiani of Eurasia Group commented on the Libya-OPEC agreement.

Now, central bank governor Sadiq al-Kabir Sadiq, and Fayez Seraj, who leads the Government of National Accord (GNA), are in pursuit of monetary and fiscal reform, aimed at improving Libya’s economy.

“The meeting dealt with the necessary financial arrangements to provide funding to the National Oil Corporation so as to be able to raise production and carry out its tasks and responsibilities in … production, exploration, refining and transport of crude oil and petroleum products,” the GNA said in a statement.

Almost all of Libya’s budget revenue comes from oil exports, meaning there is no way the government could realistically boost its budget revenues. The nation’s economy is in dismay following decades of structural inefficiency and mismanagement, whilst the recent outbreak of tribal warfare has made the situation even worse.

Libya is running a huge deficit, and the NOC says that despite its contribution to the state budget, the government has underfunded it.

“It would be an achievement in itself if Libya was able to maintain current rates of production,” Martijn Murphy of Wood Mackenzie said. “There’s still no central unity government, and so the potential for violence to flare is acute, and the threat of militias and tribes shutting down oil pipelines, valves or ports is ongoing.”

Tripoli is also caught in the crossfire of a standoff with competing quasi-political factions in eastern Libya, who also export oil. Meanwhile, the heavy presence of radical Islamists in the country, and their solid political positioning, remains a threat to national security, political stability and the economy itself.

In recent weeks, Russia pressed OPEC to coerce Nigeria and Libya – the two largest oil producers in Africa – to cut their oil output. There is still, however, no official document confirming their commitment to the cuts, as the economies of Libya and Nigeria are less prosperous than that of Saudi Arabia and less diversified than that of Russia.