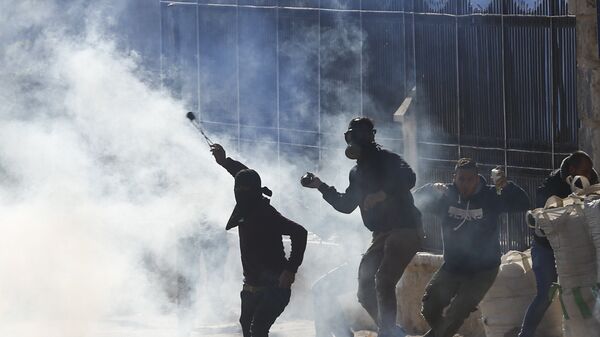 Tensions between Israelis and Palestinians have escalated after US President Donald Trump recognized Jerusalem as the Jewish capital earlier this week. Violent clashes broke out in Bethlehem, Gaza and eastern Jerusalem. Radio Sputnik discussed the situation with Eran Nissan, a project coordinator at Peace Now, an Israeli nonprofit organization.

Palestinians have held protests against US President Donald Trump's decision on Jerusalem after the leader of Hamas insisted a new intifada be launched.

“The Israeli-Palestinian conflict is the most polarizing issue in Israeli politics and society. That is what divides left wing and right wing politics in Israel. The reactions are mixed. You have left wing politicians and left wing citizens from civil societies, such as me, who see the remarks or the declaration as a negative step and as a step back in the peace process. And you have the right wing citizens and politicians who are happy or pleased with President Trump’s remarks,” Nissan said.

Former Rivals Hamas, Fatah United Against Trump's Move on Jerusalem - PLO Member
He further said that this is “another step in destabilizing the region,” which is already facing a very tense situation because Jerusalem is very unstable and now there are violent clashes in East Jerusalem.

According to the coordinator “violence will never be a means to end the conflict.”

Talking about the US president’s decision, Nissan said that it is regretful that Trump chose to make a unilateral move despite massive and outspoken protests from Arab and European leaders.

“I hope that the reaction or consequences to his [Trump’s] declaration will not be violent, that people will not be killed. I hope that he will not perform another unilateral move. If he declares East Jerusalem as the Palestinian capital that will not help the peace process as well. What we need is negotiations, we need world power, be it the EU, US or Russia to be a fair mediator between the sides,” Nissan said.

Talking about the international community and whether they will join Trump in his decision, the coordinator said that if they choose to get behind the US president’s declaration it is irrelevant to Israeli sentiment or politics.

Possible Motives Behind Trump's Recognition of Jerusalem as Israel's Capital
“What it does is that it hurts the chances that there will be trust between the sides and that there will be a fruitful negotiation and resolution to the conflict,” Nissan said.

Trump's announcement led to massive protests by Palestinians in several cities across the disputed territories. Dubbed the "day of rage," Palestinians have continued to riot with over 1,000 being injured.

Most recently, two Palestinian fighters have reportedly been killed in Israeli airstrikes on the Gaza Strip, targeting four Hamas facilities, including two arms manufacturing sites, a weapons warehouse and a military compound.

During the Six Day War in 1967 Israel seized Jerusalem from Jordan. Since then the international community does not recognize the annexation of East Jerusalem believing that its status should be decided by a pact with the Palestinians, who want to create their own state with the capital in Jerusalem.

The views and opinions expressed by Eran Nissan are those of the speaker and do not necessarily reflect those of Sputnik.