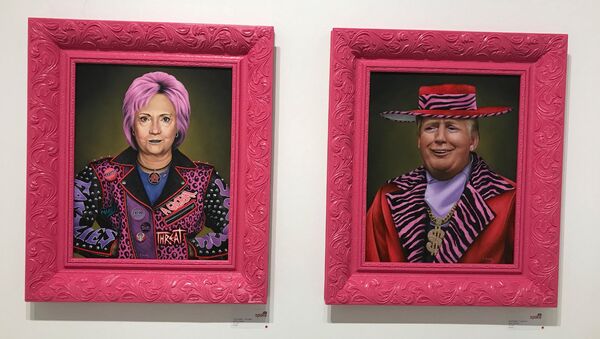 Security guards at the annual Art Miami fair became alarmed after sniffer dogs indicated something amiss inside a participant’s bag. No bombs were found, thankfully, but what they saw next was pretty amusing.

The Art Miami exhibition was briefly shut down after security dogs reacted to a bag held by a participant. Anticipating something dangerously nefarious, security personnel were instead bemused by a satirical painting of former Democratic presidential candidate Hillary Clinton.

Two tents — Art Miami and Context, a ‘sister art fair' — were shut down in precaution after the dog warning, as security officers ran the painting through x-ray, but found no suspicious substances.

"We had to err on the side of caution," claimed Art Miami director Nick Korniloff. Both tents were reopened some two hours later.

The punk-themed painting was accompanied by a similar piece entitled "Trump Pimp," depicting the president in a red zebra hat and matching tuxedo, wearing a massive golden dollar sign on a chain. The satirical painting of Trump was reportedly hanging in place when the canine alert occured.

Florida-based gallery owner Ken Hashimoto stated that police were unsure what caused the dogs to react so strongly, the Herald reported.

"They have no idea," he said, laughingly adding that: "My thought is [that it was] a Republican bomb dog."