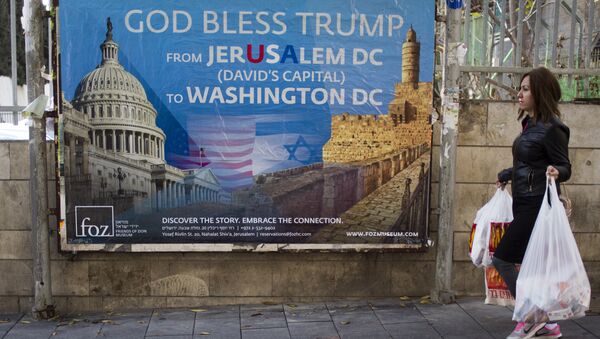 Palestinian National Authority (PA) Foreign Minister has explained why Washington can no longer play a role in the Middle Eastern "quartet", which includes Russia, the European Union and the United Nations.

"The United States has excluded itself [from the peace process], they can no longer mediate in the Middle Eastern settlement. They have become a party to the conflict, which rules out the possibility of participation in the peace process," Palestinian National Authority (PA) Foreign Minister Riyad Maliki said Saturday, addressing the consultations of the Arab foreign ministers held in Cairo. The participants are expected to decide on further joint actions of the Arab countries in relation to the issue of Jerusalem.

According to the minister, Washington can no longer play a role in the Middle Eastern "quartet", which includes Russia, the European Union and the United Nations alongside with the United States, stressing the necessity to "look for a new basis for settlement".

The statement was made in wake of US President Donald Trump's Wednesday's announcement, recognizing Jerusalem as the capital of Israel and moving the US embassy from Tel Aviv to Jerusalem, which sparked a negative reaction from many countries around the world, primarily in the Middle East.

READ MORE: Trump's Jerusalem Decision: 'This is Another Step in Destabilizing the Region

The move has ignited fierce protests among Palestinians across the West Bank, Jerusalem and Gaza, with severe clashes broking out between them and Israeli forces. The "day of rage" has resulted in two deaths and about 760 people injured, health officials in Gaza told Sputnik.

The move also induced the leader of Hamas to insist on a new intifada be launched, what triggered Israel's airstrikes in Gaza Strip, killing two and wounding 15 people in the area.