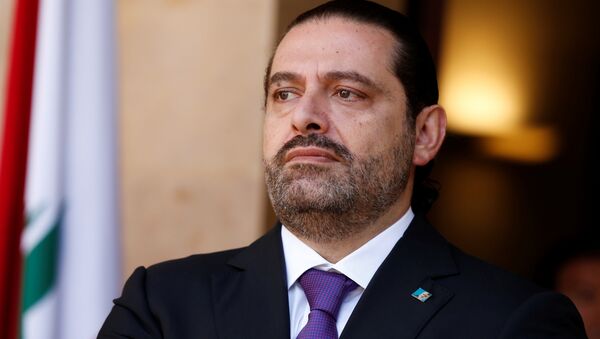 Lebanese Prime Minister Saad al-Hariri has reacted to the arrival of the leader of an Iraqi paramilitary group accompanied by Hezbollah fighters on the country's border with Israel.

According to a statement of Lebanese Prime Minister Saad al-Hariri, the border visit by an official of the Iraqi paramilitary group Asaib Ahl al-Haq has violated the country's law, forcing him to instruct security chiefs to "prevent any person from carrying out activities of a military nature on the country's territory and to prevent any illegal actions."

The statement was made after Qais al-Khazali, the leader of the Iraqi paramilitary group, accompanied by Hezbollah fighters, had visited Lebanon's border with Israel, declaring his readiness "to stand together with the Lebanese people and the Palestinian cause," according to a video circulating on social media.

"We are now on the border separating southern Lebanon with occupied Palestine with our brothers in Hezbollah, and announce our full preparedness to stand united … against the Israeli occupier," Khazali says in a video address.

Al-Khazali has visited the entire border with "occupied Palestine," as reported by Reuters news agency. The footage shows an unidentified commander gesturing towards military outposts in northern Israel and telling Khazali that they were targeted by Hezbollah missiles in previous fights between the group and Israel.

This video followed Hariri's decision to revoke his resignation after a shock announcement made on November 4 while visiting Saudi Arabia, accusing Iran and the Hezbollah movement of allegedly attempting to destabilize the situation in Lebanon and the Middle East.

The Lebanese prime minister has recently stated that he would not tolerate Hezbollah's positions, affecting "our Arab brothers or targets the security and stability of their countries," reasserting his demand to the group to stick by the state policy of staying out of regional conflicts.