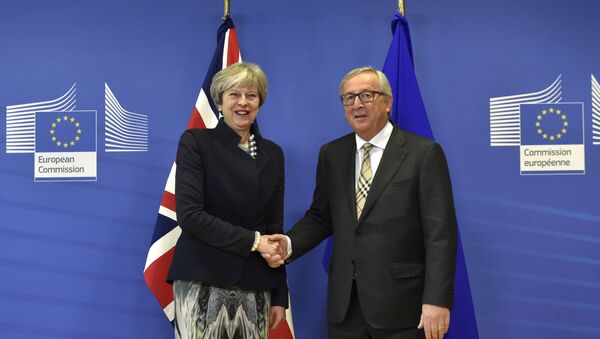 European Commission President Jean-Claude Juncker has said that the “breakthrough” on post-Brexit relations between Britain and the European Union have paved the way for moving the talks on to the next phase.

The last-minute deal brokered on Friday envisages no “hard border” between Northern Ireland and the Republic of Ireland, EU citizens in the UK, and UK citizens in the EU, will see their rights protected and Britain will pay Brussels a settlement bill of between £35 billion ($46.8 billion) and £39 billion ($52.2 billion).

Theresa May hailed the breakthrough as a "hard-won agreement in all our interests."

EU Commission President Believes 'Breakthrough' Achieved in Brexit Talks
The leaders of the remaining 27 EU countries are scheduled to meet in Brussels on Thursday for a European Council summit to endorse the deal.

If they give their nod to the deal, and Juncker said he was “confident” they would do so, it will clear the path for negotiations on the relationship after the UK's withdrawal from the EU.

London now has about a year to hammer out an agreement on future relations with the EU, which will have to be ratified by the EU nations and the UK Parliament, before Britain leaves the bloc in March 2019.

However, Northern Ireland’s Democratic Unionist Party said there was still “more work to be done” on the border issue and Labour leader Jeremy Corbyn said that Theresa May had only managed to "scrape through" the first phase of Brexit negotiations about 18 months after the Brexit referendum.

The Brexit talks between the UK and the EU, which kicked off on June 19, are expected to wrap up before the end of March 2019. In a referendum on June 23, 2016, about 51.9 percent of British voters said "yes" to their country leaving the bloc.