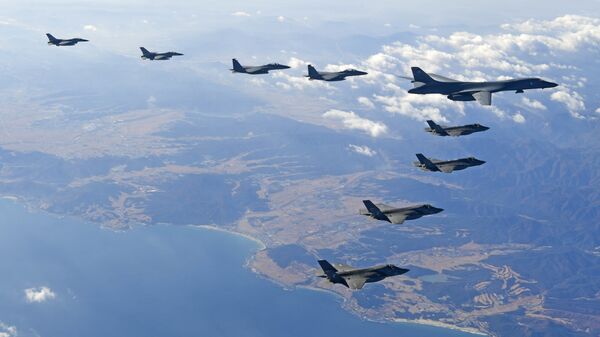 North Korea has issued bellicose new rhetoric in retaliation against the US sending its strategic B1-B bombers to the Korean Peninsula earlier this week.

A North Korean Foreign Ministry spokesman has declared that the ongoing US-South Korean war games and White House officials' "confrontational warmongerings" can be perceived as Washington's preparations for launching a strike against Pyongyang, according to the Korean Central News Agency (KCNA).

"We do not wish for a war but shall not hide from it, and should the US miscalculate our patience and light the fuse for a nuclear war, we will surely make the US pay dearly for the consequences with our mighty nuclear force, which we have consistently strengthened," the spokesman said.

Touching upon the Washington-Seoul aerial drill, the spokesman said that "they are creating a touch-and-go situation on the Korean Peninsula" and that they make the inevitability of the "outbreak of war" there "an established fact." "The remaining question now is: when will the war break out," he pointed out.

On Wednesday, Reuters cited sources within the country's military as saying that a US B-1B bomber has flown over the Korean Peninsula as part of massive US-South Korean war games.

The five-day drills come a week after North Korea launched what it touted as its most sophisticated intercontinental ballistic missile (ICBM).

Commenting on the launch, US President Donald Trump's national security adviser Lt. Gen. Herbert McMaster warned that the potential for an open military conflict between the United States and North Korea is growing and that Pyongyang poses the "greatest immediate threat to the US."
North Korea has more than once threatened to respond in kind to regular US-South Korean drills.

In January, Pyongyang cautioned that "if the South Korean warmongers ignite a war against the DPRK, totally counting on the US, the North Korean revolutionaries will wipe out the aggressors to the last man by fully displaying their tremendous might."

In April, the North Korean Embassy in Moscow warned the US against committing a reckless provocation against Pyongyang, which it said "will respond to a nuclear war with a nuclear strike."

Also cautioning against such provocations were Russia and China, which in September criticized US President Donald Trump's United Nations General Assembly speech, threatening to "totally destroy" North Korea if necessary.

Russian Foreign Minister Sergey Lavrov, for his part, said last month that "the recent actions of the United States [such as sanctions pressure] seem to be aimed deliberately to provoke Pyongyang to commit new harsh actions."