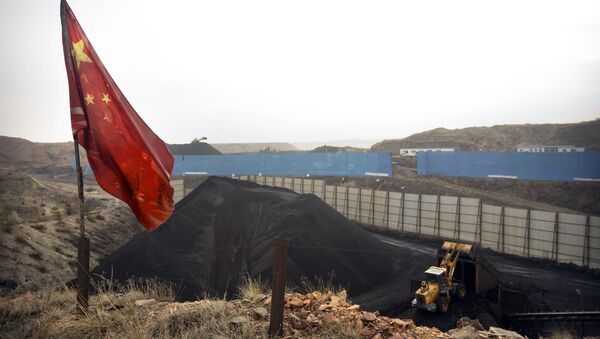 As yet another freezing winter currently descends on northern China, heating for many households in Hebei and other provinces in the region remains turned off.

Hebeinews.cn, the official website of the provincial government of Hebei Province, has recently been swamped with complaints from local residents about the lack of heating.

"We have had no heating since November 28. We consulted the gas company and they replied that gas is in short supply. No schedule about the restoration of gas was revealed," a resident from Shijiazhuang posted on the website.

"Many residents have started returning to coal briquettes or canned gas to cook," the resident goes on to say before desperately calling on the local government to solve the problem.

With winter setting in, such complaints also appeared in other northern provinces such as Shanxi and Shaanxi.

While a coal-to-gas transition project continues to be carried out throughout rural areas in these regions, many residents have literally been left out in the cold due to the lack of natural gas reserves or lagging gas pipeline construction.

In fighting against air pollution, in 2013 the Chinese government issued an action plan to reduce the concentration of fine particulate matter (PM) to a certain level by 2017 and push forward in all aspects of society the use of clean energy such as natural gas or electricity to replace coal.

The action plan is fast approaching its official deadline, and many cities across the country, including Beijing, Tianjin and Shijiazhuang have already set their goals and reinforced their efforts in transitioning from coal to gas.

As the project continues, however, the shortage of clean, natural gas in China has grown increasingly severe. Combined with the heavy demand for heating in the winter, unsuccessful or delayed coal-to-gas transitions in other regions across the nation are affecting ordinary people, which has outraged many and aroused fierce discussions about the fine balance between environmental protection and the livelihood of those who live in it.

While it seems sensible to replace coal with natural gas in order to curb pollution, experts say the local government should tackle the problem of China's reserves more responsibly and flexibly so as to avoid disturbing people's lives.

"Too hasty a transition from coal to gas is not necessarily a good thing," wrote Liu Huafang, a Beijing-based writer focusing on e-commerce, on his Sina Weibo. He called the transition in rural areas a "Great Leap Forward."

Winter temperatures in Hebei Province can reach lower than minus 10 degrees, and yet many residents still do not have any source of heating in their homes. "My house is like an ice cave. And burning coal is not allowed. How can we survive the winter?" one netizen who lives in Hebei wrote in a complaint on hebeinews.cn.

Hebei Province, surrounding Beijing and Tianjin municipalities, is currently under tremendous governmental pressure to restrict pollutant emissions in order to reduce smog in the region. Industrial pollution and coal burning are major contributors to the smog that enters into Beijing.

Eighteen cities and districts, including Langfang and Baoding, circling Beijing, are currently listed as "no-coal areas" in the fight against air pollution, where burning coal has been strictly prohibited since November of this year.

These places, including some rural areas, must now only use gas or electricity in an attempt to reduce pollution, with subsidies for mines, factories and individual households willing to make the change. Outskirts and suburbs of these cities that have not yet completed the transition have been left with no source of heating.

In some Baoding townships, for example, equipment for burning coal for heating purposes has been dismantled, but gas heating systems have not yet been constructed, as reported by Caixin. People must use air-conditioners or electric heaters, both of which are extremely expensive to operate, just to get warm.

Some county-level cities in south-central Hebei, such as Gaobeidian, are lucky enough to receive some heating at certain hours of the day. "The gas will be turned off between 1-5 am, and 1:30 to 4:30 pm," a gas company in Gaobeidian wrote in a public notice to local residents.

The Hebei Development and Reform Commission has issued an orange alert for a shortage of natural gas since November 28, which means all gas in the province will be reduced or completely cut off according to priority, with residence, hospitals and schools as the highest priorities, followed by vehicles, industrial usage and chemical engineering.

The warning, second only to a top-level alert, signifies a 10-20 percent lack of availability of natural gas throughout the province, which will have a severe impact on how society will continue to function this winter.

The impact of this emergency is already causing anxiety among local residents and industries. The Affiliated Hospital of Hebei University in Baoding city recently received a notice limiting their gas supply to just 2,729 cubic meters.

The hospital said it requires at least 20,000 cubic meters to ensure the continuation of normal operations and medical procedures, treatments and sterilizations for its daily 3,000 in-patients, including over 200 infants and children.

"We hope the authorities will carefully reconsider their decision, so that we can continue to safeguard the health and lives of the people," the hospital wrote in a public letter.

In response to complaints, Xu Qin, the governor of Hebei Province, inspected the gas supply in its provincial capital, Shijiazhuang, stressing that people's livelihood should always be the highest priority. He said the government will "do their best" to ensure a warm winter for residents.

After the State Council published its action plan against air pollution in 2013, many regions across the country immediately began to implement measures to enact coal-to-gas transition projects. But apparently some large-scale projects failed to take the limited supply of natural gas into proper consideration.

The news that many people have been left out in the cold due to a gas shortage came out rather untimely, as northern parts of the country are sparing no efforts to hit the deadline.

Some media began to reflect on this transition, which they agree is good for the long term but is presently disturbing ordinary people's lives. The media also called for local governments to be more concerned and more flexible.

Individuals have also been voicing their opinions. More and more people are publicly questioning the logic of pushing forward gas use in the nation even though different regions, particularly rural areas, have complicated situations to consider.

"It is not realistic to promote gas use in rural areas due to their complicated topography. The cost in laying pipelines, maintenance and safety controls is huge. Besides, the cost of gas is expensive for farmers," Liu wrote.

"The rural area in the north is vast. It is not suitable to blindly and simply copy what is suitable for a city in those areas. Whether it is Hebei or Henan, these regions have their own geographical features and living habits. Making sweeping changes will only increase the cost," he added.

"It is the right time for China to switch to the use of natural gas for heating, but the project shouldn't be carried out in haste," Jia Weilie, a deputy director at the Beijing Academy of Ecocivilization, told the Global Times.

As reported, the price of LNG (Liquid Natural Gas) has risen to a record high of 9,400 yuan per ton, a 100 percent increase since September. The seasonal demand for more heating, along with the new coal-to-gas switch in traditionally coal-burning households and factories, is the reason for this soaring escalation.

During the coal-to-gas transition project in Beijing, Tianjin and Hebei Province, over 1.9 million households actively participated in phasing out the use of coal. In Beijing alone, 144,000 families agreed to replace coal as a source of heating, according to a report from cctv.com.

As China enters the brutally cold winter season, there is already an estimated shortage of 10.5 billion cubic meters of natural gas, according to an analysis quoted by Securities Times, pushing up the prices.

Zhang Yuqing, vice director for National Energy Administration, said during a recent industry conference that the sharp increase in gas prices this year was mainly caused by the lack of gas reserves, which were grossly underestimated by authorities.

Presently, domestic and imported natural gas are supporting this demand. But the annual increase in gas resources will be utterly unable to provide the 30 billion cubic-meters increase in China's gas consumption every year.

Meanwhile, imported LNG and pipeline gas is limited by factors such as pipeline capacity and gas prices. At present, authorities are not optimistic about any large-scale increase in other gas resources.

In 2015, China had only 25 underground gas reserves, accounting for a mere 3 percent of the country's gas consumption, much lower than 17.4 percent in the US and 17 percent in Russia.

000000
Popular comments
Sounds like that gas pipe to Europe which ignited all these American led wars in the Middle East, should go through China instead to control air pollution and take care of people's basic fundamental rights to heat their home.
Rokenbok
7 December 2017, 07:19 GMT
000000
Also a 100% sudden increase in natural gas is criminal and is actually a crime against humanity. It is a not a simple matter of supply and demand, this is to keep people from freezing to death during the winter.
Rokenbok
7 December 2017, 07:23 GMT
000000
Newsfeed
0
New firstOld first
loader
LIVE
Заголовок открываемого материала
Access to the chat has been blocked for violating the rules . You will be able to participate again through:∞. If you do not agree with the blocking, please use the feedback form
The discussion is closed. You can participate in the discussion within 24 hours after the publication of the article.
To participate in the discussion
log in or register
loader
Chats
Заголовок открываемого материала
Worldwide
InternationalEnglishEnglishMundoEspañolSpanish
Europe
DeutschlandDeutschGermanFranceFrançaisFrenchΕλλάδαΕλληνικάGreekItaliaItalianoItalianČeská republikaČeštinaCzechPolskaPolskiPolishСрбиjаСрпскиSerbianLatvijaLatviešuLatvianLietuvaLietuviųLithuanianMoldovaMoldoveneascăMoldavianБеларусьБеларускiBelarusian
Transcaucasia
ԱրմենիաՀայերենArmenianАҧсныАҧсышәалаAbkhazХуссар ИрыстонИронауОssetianსაქართველოქართულიGeorgianAzərbaycanАzərbaycancaAzerbaijani
Middle East
Sputnik عربيArabicArabicTürkiyeTürkçeTurkishSputnik ایرانPersianPersianSputnik افغانستانDariDari
Central Asia
ҚазақстанҚазақ тіліKazakhКыргызстанКыргызчаKyrgyzOʻzbekistonЎзбекчаUzbekТоҷикистонТоҷикӣTajik
East & Southeast Asia
Việt NamTiếng ViệtVietnamese日本日本語Japanese俄罗斯卫星通讯社中文（简体）Chinese (simplified)俄罗斯卫星通讯社中文（繁体）Chinese (traditional)
South America
BrasilPortuguêsPortuguese
NewsfeedBreaking
12:57 GMTPakistan Will Get ‘Badly Burnt’ If It Courts the Taliban Beyond a Point, Warns Author
12:51 GMTUS General Mark Milley Reportedly Downplayed George Floyd Protests' Severity in Talks With Trump
12:51 GMTIs Narendra Modi Emerging as the Most Sports Loving Indian Prime Minister?
12:28 GMTFAA Bans Drone Flights Over Texas Bridge After Thousands of Haitians Filmed Flocking to Area
12:27 GMT'Show Got It Wrong': Priyanka Chopra Apologises After Taking Flak Over 'The Activist' Format
12:05 GMTNicki Minaj Tweet That COVID-19 Vaccines Cause Impotence Sparks Protest Outside CDC HQs - Video
12:01 GMTPelosi Asked After Capitol Riot If WH Staff Did Anything But 'Kiss' Trump's 'Fat Butt', Book Claims
11:48 GMTArmenian Police to Block Streets Near Central Square Due to Planned Rallies
11:32 GMTUK Military 'Actively Recruiting' New Spies for Deployment in Asian Region Amid AUKUS-Caused Waves
11:14 GMTPunjabi Activists Clash With Police in Delhi During Anti-Farm Law Protests - Video
11:07 GMTClip of Man With Crossbow on Balcony in Netherlands Emerges Online Amid Reports of Stabbing Attack
10:48 GMTTwo Killed, One Injured in 'Crossbow Attack' in the Netherlands
10:44 GMTRussia Says IAEA Should Monitor Process of US Handing Nuke Tech Over to Australia
10:44 GMTUK-US Post-Brexit Trade Deal Unlikely If Northern Ireland Peace Accords Destroyed, Pelosi Says
10:41 GMTAUKUS Will Make Indo-Pacific Fiercely Contested, Sinologist Says
10:40 GMTOxbridge Fails to Top Times' List of Best UK Universities for First Time
10:39 GMTLa Francophonie Suspends Guinea From Organisation Over Military Coup
10:24 GMTRussian Online Voting System Suffers DDoS-Attack Coming From US, German, Ukrainian IPs
10:21 GMTPutin: US and NATO Countries Should Provide Most of Money for Post-War Afghan Reconstruction
09:58 GMTPutin to Vote Online in Elections to Russian Parliament